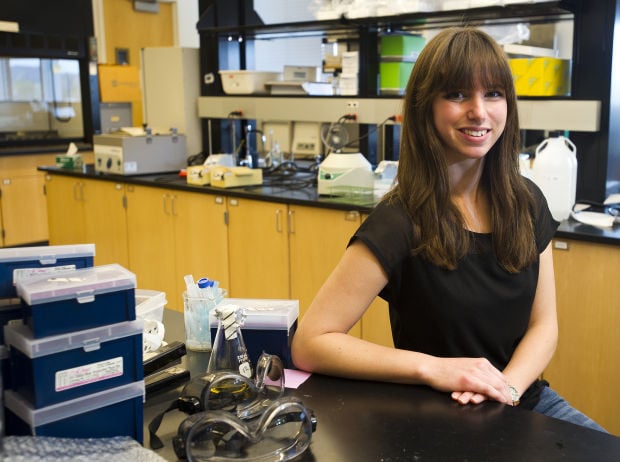 Maria Noterman is graduating from Winona State University today with a degree in biochemistry. She will attend the University of Iowa this fall to obtain her PhD. She has done major research into the intersections of how Down syndrome and Alzheimer's affect the brain. 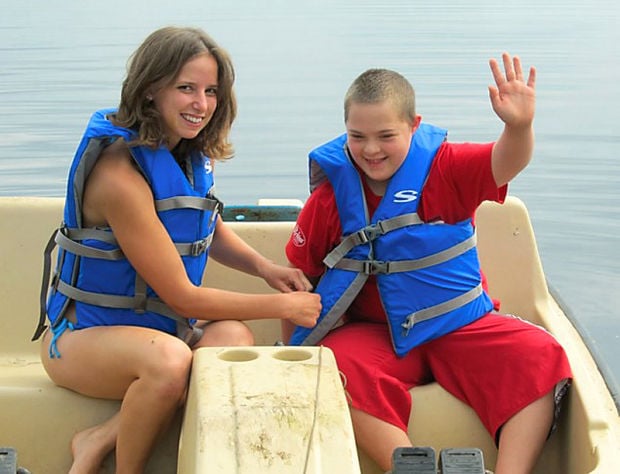 Maria Noterman and her brother, Willie, who has Down syndrome.

Like many other graduating students at WSU, Maria Noterman spent some of her free time rollerblading, hiking in the bluffs and going home to see her family several times a semester.

But the 22-year-old biochemistry major has also spent the final two years of her undergraduate career immersed in a cutting-edge research project evaluating a mouse model of Down syndrome.

It's an issue that hits close to home.

In Noterman's time at WSU, she’s completed internships at the Hormel Institute and Mayo Clinic, and this year she presented her Down syndrome research in a special poster session at the Experimental Biology conference in San Diego.

The quiet, dark-haired Noterman, who has spent countless hours in the lab with tests and textbooks, is now headed for a Ph.D. program in biosciences at the University of Iowa this fall, where she was awarded a fellowship.

Biochemistry has always seemed to come easy to her. Confidence, not always so much.

Noterman grew up in Adams, Minn., a small town near Austin. The second-oldest of five siblings on the family farm, Noterman enjoyed outdoor activities, 4-H club involvement and spending time with her siblings.

But graduating with a high-school class of 70 students, Noterman said she underrated her talents. That’s where her professors at WSU played an integral role, with constant encouragement to pursue something she loved.

“That’s given me a lot of confidence,” Noterman said.

Initially, Noterman came to WSU for nursing, because several of her family members had done the same. But her plans changed when she took an introductory psychology class. She was particularly fascinated with neuroscience, which seemed to offer avenues for creativity and exploration.

That class began a four-year journey into biochemical research, which proved to be plenty of stimulation.

Noterman’s research concerns connections in the brain, specifically relating Down syndrome with Alzheimer’s. Fifty percent of people with Down syndrome get Alzheimer’s, so Noterman wanted to find out more about how brains with those diseases function differently.

She has additional interest in Down syndrome, because her 16-year-old brother, Willie, has the condition.

At first, she had no idea Down syndrome and Alzheimer’s were so closely linked.

“I did some digging, and it was surprising,” Noterman said.

Her curiosity and personal interest led Noterman to commit to her major project as a sophomore. “I bit off a lot to chew,” she admitted. “But I enjoyed it.”

WSU chemistry professor Francis Mann has assisted Noterman and a psychology professor, Richard Deyo, in Noterman’s project. Mann said Noterman already writes and acts like a professional in her field.

“She makes it look easy,” Mann said. “She’s gonna walk into graduate school and just blow everyone away.”

Noterman said she has discovered a second home in the lab, where she can conduct her own research and lead her classmates.

“It’s the first job I’ve really loved doing,” she said. “There’s all sorts of places you can go with research.”

Noterman said her family is supportive of her academic career. And her brother Willie continues to be an inspiration -- but Noterman’s interest is completely her own, Mann said.

“I’ve never felt like she was using that situation,” Mann said. “She’s very inspired and curious about Down syndrome, and she’s built her research around it.”

For Noterman, one source of her passion is short but profound.

A reception will be held after each ceremony at the pavilion near the alumni gazebo in the center of campus. The rain location is Talbot Gymnasium.

The ceremonies are open to the public. Seating is first-come, first-served. No tickets are needed.

Traffic will be heavy in the areas around campus all day.

Watch Now: America is running out of lifeguards

Get our local education coverage delivered directly to your inbox.

While Minnesota officials have now recommended masks to be worn during the fall semester, Winona Area Public Schools is still unsure about its…

Children in Winona will have another opportunity to participate in traditional games originally played by various cultures throughout North America.

With a hard year of unexpected changes in learning styles, Winona Area Public Schools Superintendent Annette Freiheit, with the help of the bo…

Maria Noterman is graduating from Winona State University today with a degree in biochemistry. She will attend the University of Iowa this fall to obtain her PhD. She has done major research into the intersections of how Down syndrome and Alzheimer's affect the brain.

Maria Noterman and her brother, Willie, who has Down syndrome.