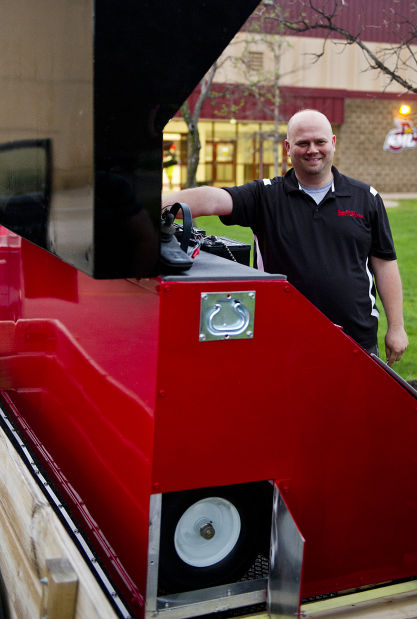 Paul Van Eijl with his invention, the Ice Jet. 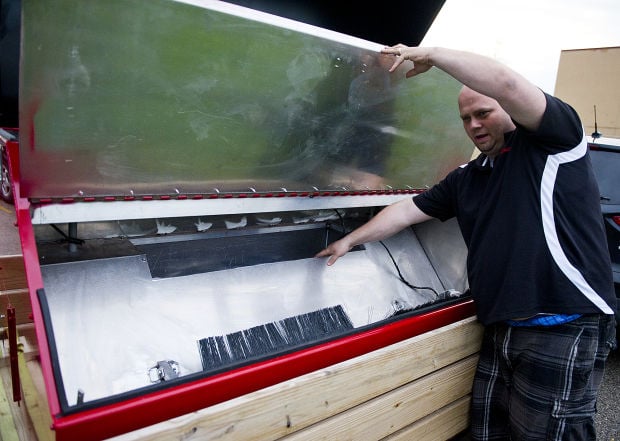 Paul Van Eijl shows off the first model of his new invention, the Ice Jet, which he hopes could eventually replace the iconic Zamboni and other ice-resurfacing machines.

WINONA, Minn. — A Winona-area resident just finished the prototype of an invention that just might push — or shave — traditional ice-surfacing machines off the hockey rink.

Buffalo County resident Paul Van Eijl said his invention, which he calls the “Ice Jet,” will do the ice resurfacing job of the classic machine much quicker — in about a minute or so — using GPS coordinates to control multiple machines at once.

It won’t need a driver, will be electrically powered and will recycle the ice collected by melting it in the machine and using the water to resurface the hockey rink. His invention isn’t on the market yet, though a prototype has been enough to generate a phone call from the reality television show “Shark Tank,” which highlights inventors and entrepreneurs hoping to make it big.

“It’s really doing the same thing (as a Zamboni),” Van Eijl said as he stood next to his prototype on a recent day, referring to the most well-known of the brands of ice-resurfacing machines. “You’re just basically making it eight times as efficient.”

The 1940s-era machine has been an icon in hockey, as it putters around the arena between games and periods to smooth the ice for players. And for the most part, it’s remained unchanged, Van Eijl said. Most run on gas or propane — although newer ones are electric — and are about the size of a truck. Each requires a driver, and use quite a bit of water.

Van Eijl said he’s had engineers, robotics companies, an NHL team, and others check out the machine and no one has been able to poke a hole in the idea. One engineer spent five hours “trying to tear it apart” but couldn’t, he said.

Van Eijl estimates it could save hockey rinks significant amounts of money each year, in part because it could make scheduling rink time more efficient. A traditional machine is typically used between periods and games, meaning multiple 10 to 15-minute increments throughout each event. If rinks could get those minutes back, they could possibly squeeze in another game to bring extra revenue. That, and recycling the water is a cost bonus, too.

Still, Van Eijl said, he and his team is realistic about the challenges they’ll face.

“The biggest challenge to the Ice Jet is the tradition of the ice resurfacing machine,” Van Eijl wrote in his business plan. “The machine has been a staple of the game of hockey for over 60 years.”

But, as Christ put it, “Nostalgia only goes so far before cost savings take over.”

“This is the new generation,” Van Eijl said as he stood next to his invention during a recent test run. “Looking at history here.”

CLARIFICATION: An earlier version of this story and a photo caption both exclusively referred to ice-resurfacing machines as Zambonis. The story has been updated to make it clear that while the brand is well-known, there are several competing companies who make such machines.

"The biggest challenge to the Ice Jet is the tradition of the ice resurfacing machine. The (Zamboni) has been a staple of the game of hockey for over 60 years."

A collection of the most-read local news stories on winonadailynews.com in 2014.

Paul Van Eijl with his invention, the Ice Jet.

Paul Van Eijl shows off the first model of his new invention, the Ice Jet, which he hopes could eventually replace the iconic Zamboni and other ice-resurfacing machines.