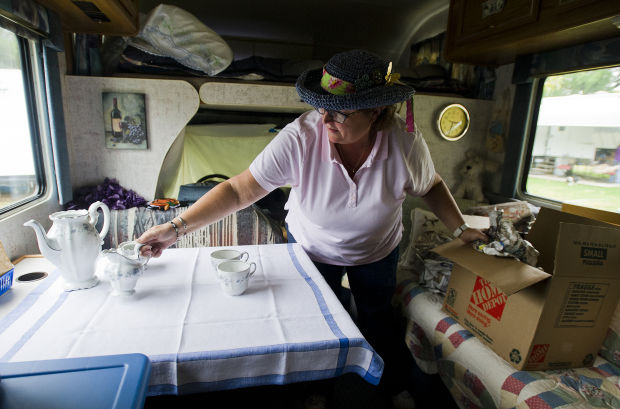 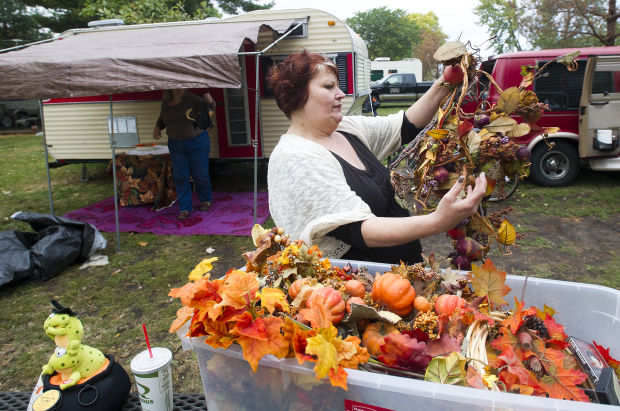 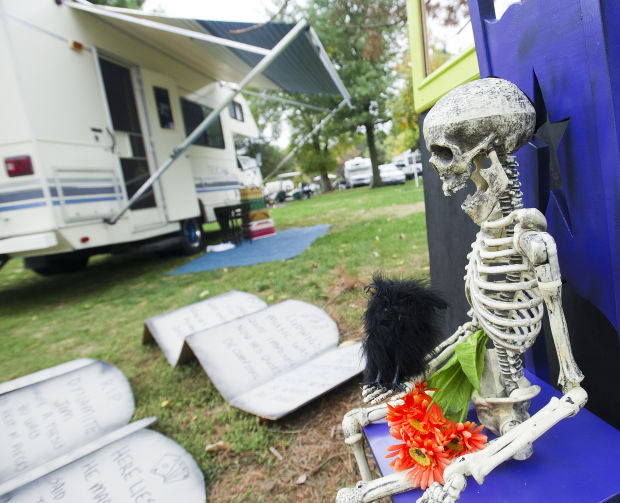 Halloween decorations are set up at campsites Friday, Oct. 4, 2013, for a Halloween weekend at Prairie Island Campground in Winona. (Andrew Link/Winona Daily News)

Janet Ewert stepped out of her camper parked at Prairie Island Campground wearing a blue crochet hat with a pink flowered headband wrapped around it and vintage pins secured to one side.

In her hand was a two-foot tall cardboard cutout of linked gravestones with witty sayings on them.

“Ludwig’s music was quite imposing,” one had written on it. “Now he’s quiet, decomposing.”

She placed them outside her camper — or “glamper” — which she’s nicknamed Molly McGhee. Janet is one of about

12 women at Prairie Island this weekend who have renovated old campers using their crafty imaginations to make them glamorous. Because of their theme of being glamorous, the campers are nicknamed “glampers.”

Being glamorous and spooky don’t typically go together, but this weekend, with Prairie Island’s open house “Halloween at the Campground,” the two make a fine match.

The one day event will have a kid’s costume contest, a decorations contest, along with Halloween movies and trick-or-treating.

Most of the lady glampers — as the group calls themselves — will be dressed up as “witches with hitches” and will be giving out candy.

But for the glampers, the real reason they’re there is to have a ladies weekend, share craft ideas, and to relish in the accomplishment of restoring, most of the time by themselves, an old camper that they get to enjoy a bit of freedom in.

“It’s kind of empowering as a woman,” Janet said as she sat next to her artfully placed tea set in her camper.

To be able to drive the big camper and park it, she said is empowering, but also to “tear these things down and put them back together and make them so darn cute,” is another.

The Wisconsin Lady Glampers — which were joined Friday by a few from a similar Minnesota group — are a bunch of ladies that met through their interest in glamping, which has become a national trend. After meeting for the first time earlier this year, the group became fast friends.

For Carolyn the empowerment came after putting a lot of elbow grease into her glamper, instead of asking her husband of 38 years to do it for her instead.

“Every component in here I not only did, I picked out,” Carolyn said. “It’s really me.”

Carolyn sat on a lime green, pink, and yellow striped bench in the camper. To her right was a matching bench which fit the theme of what she calls “Grandma’s Kitchen.” Next to a set of brightly colored window drapes was a lime green coffee pot sitting near a matching green fabric flower, both set on a long white doily.

Nearly everything in the camper, from the bed cover, pillows, lamp, and decorations, match.

The other 10 or so glampers match nearly the same — although with different themes.

“Everyone comes from all these different walks of life,” Carolyn said. “But we have this common thread.”

And all of the glampers are open for people to stop in and check them out.

“If people want to come and take a peek we’re more than happy to have them,” Carolyn said enthusiastically. “And if we can convert a couple sisters that would be great!”

The more sisters the better is their opinion.

“It’s all about getting together and being who we are and what we are which is being silly,” Janet said.

Watch Now: America is running out of lifeguards

Halloween decorations are set up at campsites Friday, Oct. 4, 2013, for a Halloween weekend at Prairie Island Campground in Winona. (Andrew Link/Winona Daily News)