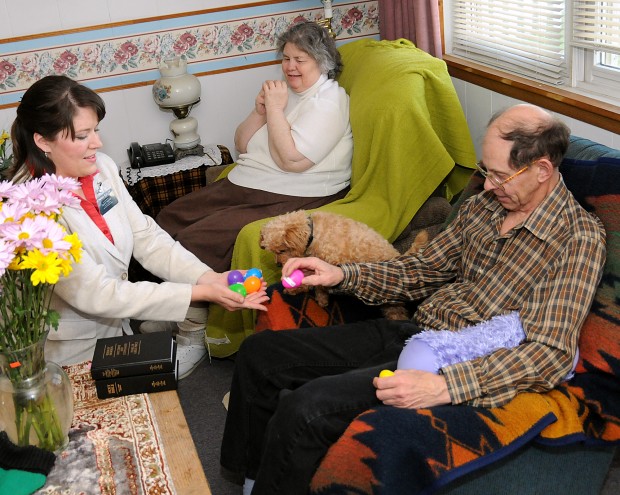 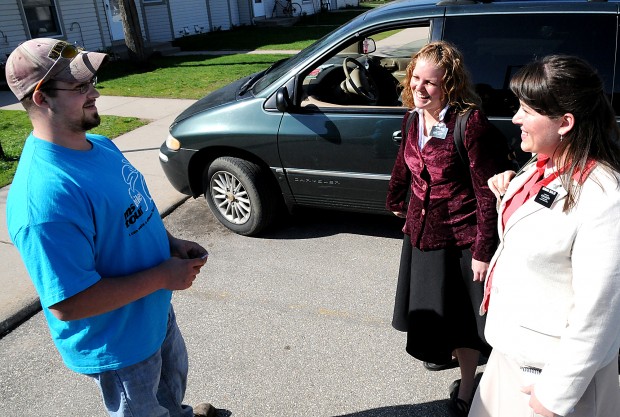 When Marie Buhler and Autumn Keys knock on doors, some people hide behind the curtains. Others just give in and open up.

Besides, it's been a long time since a woman was on their doorstep with Scripture in hand.

It has been 20 years since Winona had women Mormon missionaries. The pair have been in town for about three weeks knocking on doors and walking the streets preaching the word of God. Their only recognizable item: A nametag identifying them as missionaries of the Church of Jesus Christ of Latter-day Saints.

"Most people don't know about this history and the Book of Mormon," Buhler said. "That's why we are here. We are here to serve."

Buhler and Keys sat on the patio of their west end apartment Friday afternoon with umbrellas in one hand shielding themselves from the powerful sunlight. The pair mapped out their plans for the next week on where they would visit and who has personal lessons. The women, both 22, are assigned to a large chunk of Minnesota and Wisconsin that stretches from Mondovi, Wis., to Plainview, Minn., and the surrounding areas.

When the other missionaries left, the women took over their contact list and add names to it as they meet people. It is separated into people who are close to baptism and those who are new to the church or the idea of God.

As the clock neared 2 p.m., Buhler and Keys slipped on their backpacks, which are full of Scripture, notes and Gospel tracts, and headed out.

Their long skirts and thick blazers hid their fair skin from the elements. The first stop was at a nearby trailer court to visit a family who doesn't speak English. Buhler greeted the family in near perfect Spanish. She has been speaking the language for 10 months. She got a nine-week crash course when the church assigned her to the area. Keys doesn't speak any languages besides English, but even as Buhler prays and preaches with the family, Keys knows what is going on.

"God's spirit knows no language," she said. "I can still feel it and see which verses they are reading from."

The pair set up an appointment with the family in a week and drove to their next location: A modest house on east Third Street where Eugene Hand, 67, lives with his sister Twyla Hand, 64. They are already members of the church but meet with Buhler and Keys weekly for help in understanding the Scripture.

After the lesson, Eugene Hand closed in prayer. "Thanks for the missionaries and their inspiration and knowledge. Amen."

Buhler and Keys spend about nine hours a day going door to door and teaching private lessons. Their term is 18 months, in which the women could be sent anywhere in the world by officials of the Church of Jesus Christ of Latter-day Saints to preach the word of God. Every six weeks, the women get a call to find out if they will be staying another six weeks or if they are leaving, in which case they would have two days notice. That would bother most people, they said, but not them.

As long as it's God's will, they will go.

Another COVID-19 related death was confirmed in Winona County Tuesday, raising the county’s total to 54.

With breakthrough cases becoming a focus as more and more people become vaccinated, Winona County Health and Human Services has shared that br…

New COVID-19 cases have been confirmed in every major educational institutes in Winona in recent days — totaling 32 new cases.

A village of Trempealeau police officer has been cited for failure to yield the right-of-way after a two-vehicle collision Monday.

Saint Mary’s University recently rejuvenated one of its older buildings and has transformed it into a modern learning facility, now named Aqui…

Watch Now: Are RoboCops coming to your police department?

Watch Now: Are RoboCops coming to your police department?

Johnathan Retzloff, left, talks with Mormom missionaries Marie Buhler, center, and Autumn Keys on Friday in Winona. Buhler and Keys are the first female missionaries in about 20 years in Winona. Jake Rajewsky/Winona Daily News
© Copyright 2021 Winona Daily News, 279 E. Third St., Suite 370 Winona,MN | Terms of Use | Privacy Policy | Do Not Sell My Info
Powered by BLOX Content Management System from TownNews.com.
You don't have any notifications.