Become a Member
Read Today's E-edition
Share This
Four-year graduation rates are strong at local universities, but many take an extra year
0 comments
Share this
1 of 2 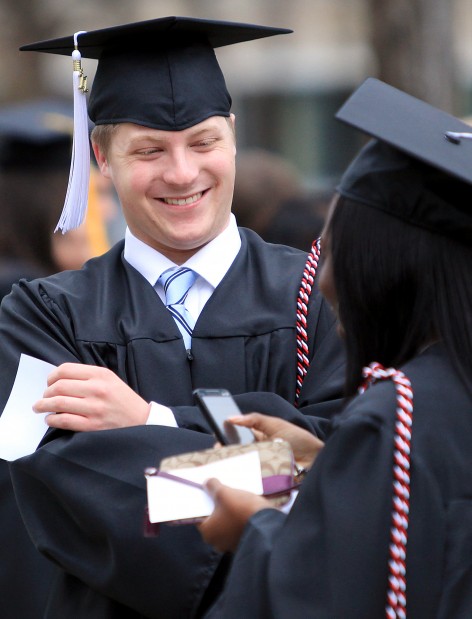 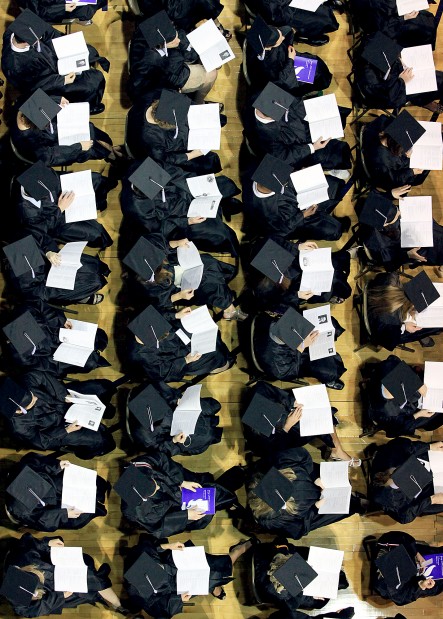 Four-year graduation rates for two Winona universities are comparable to similar area institutions, though a variety of reasons-from rigorous degree programs to simple desire-keep some students in school longer.

Over the past six years, the four-year graduation rate at Winona State University has fluctuated around the 25 percent mark, according to data provided by WSU.

That's three percent higher than the national rate of 21.6 percent for traditional four-year universities, according to ACT, a nonprofit organization that provides educational assessment and research.

By comparison, Winona State's graduation rates are the highest in the Minnesota State Colleges and Universities system. Mankato State is second with a 21 percent rate.

Saint Mary's University four-year graduation rates over the past six years fluctuated around 50 percent, according to data provided by SMU. That's seven points lower than the average reported by ACT for similar four-year private schools.

By comparison, Saint John's University and the College of Saint Benedict in St. Peter, Minn., have a four-year rate near 70 percent.

Seeking contextThere are many complexities connected to graduation rates.

"It is almost impossible to complete the program in four years," Gores said.

Education students at WSU must meet university requirements, as well as state licensing requirements before they can graduate from the program, and Gores said it takes students, on average, 4 1/2 years to finish the degree.

At SMU, the university accepts a variety of students, some of whom are under-prepared for college and may not graduate in four years, said Bob Conover, SMU's marketing and communication vice president.

The Path to Academic Success is one program SMU offers that gives opportunities to such students. If the students enrolled in that program are removed from four-year graduation statistics, SMU's graduation rate exceeds the national average, said Anthony Piscitiello, the vice president for admissions.

Not every university offers such programs, Conover said.

"We are all about access and individualized learning, and helping students succeed," he said.

Students' storiesStudents take longer to graduate for a number of reasons.

Ian Morrill of WSU graduated Friday after five years with a degree in cellular and molecular biology.

Since Morrill plans to continue on to graduate school and eventually become a biology professor, he said he wasn't in a hurry to complete his undergraduate studies.

Another issue is scheduling.

SMU graduating senior Joseph Faber, who majored in e-business technology, also spent five years in school. He said that several classes he needed for his major were canceled due to low enrollment, which added an extra year to his undergraduate career.

Conover said scheduling conflicts that force students to study longer than planned are rare at SMU.

Some students prioritize graduating in four years, saying it gives them a competitive edge in the job market.

"Being able to graduate in four years these days is impressive," he said. "Employers like it as a sign that you can keep up with your courses and work hard."

The four-year course, however, isn't best for everyone, other students say.

WSU graduate Lance Allen spent a semester in Japan to complement his global studies major. Because he wasn't able to take other courses that semester, his choice led to an additional year at WSU.

For Allen, it was a blessing in disguise.

"Being in college for five years actually helped me," he said. "I was not as mature and ready to get a job last year as I am now."

WSU graduate Caitlin Stene, who spent five years in college, said there are also personal benefits to staying in school an extra year.

"Most people change over time at college and discover themselves, which is what college is for," she said.

"This takes time, and doesn't always fit in a four-year schedule."

By the numbers: Four-Year Graduation Rates in 2010

A little more than a quarter for full-time students at Winona State University graduate in four years. At Saint Mary's University, nearly half graduate in four years. (Andrew Link/Winona Daily News)
© Copyright 2021 Winona Daily News, 279 E. Third St., Suite 370 Winona,MN | Terms of Use | Privacy Policy | Do Not Sell My Info
Powered by BLOX Content Management System from TownNews.com.
You don't have any notifications.