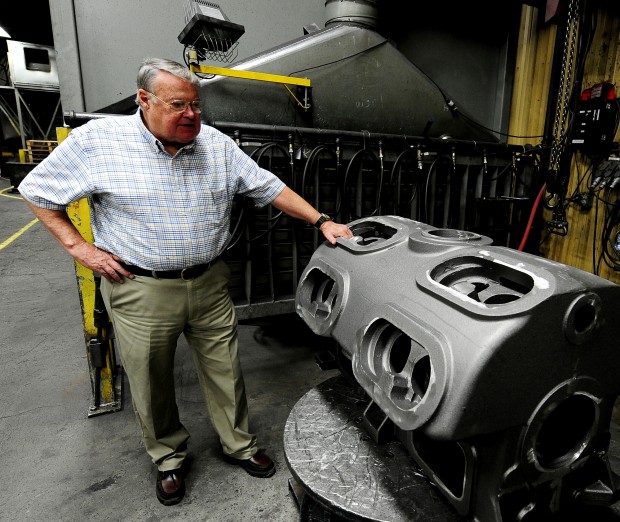 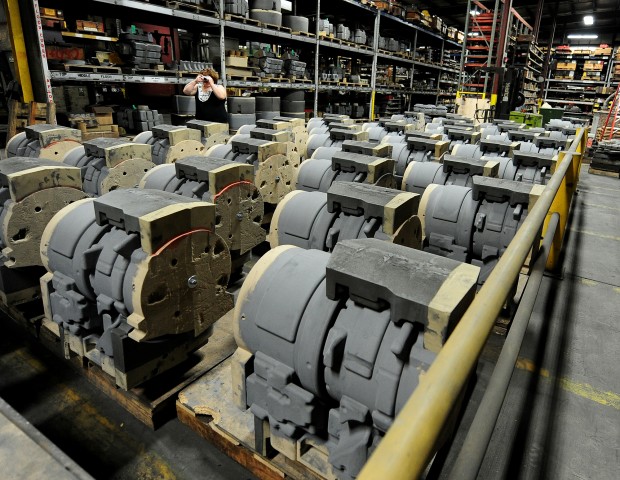 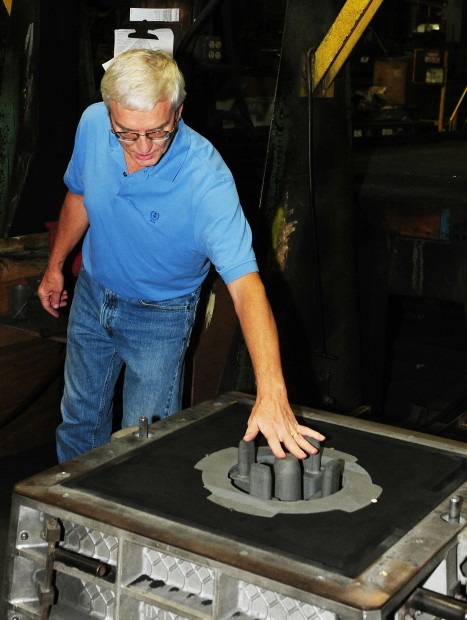 Frank Kuncz, a casting and engineering manager at Badger Foundry, explains the basics of the casting process used at Badger Foundry Saturday during a tour offered to family and friends of employees during the celebration of the company's 100 year anniversary. Rory O'Driscoll/Winona Daily News 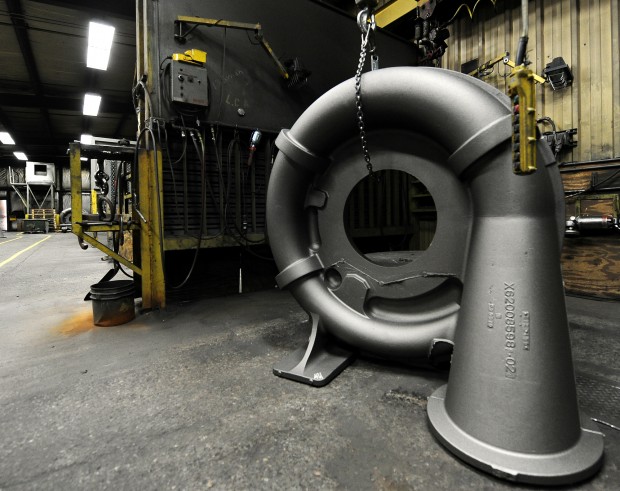 Things didn’t start very promisingly for Badger Foundry. In just its second stockholders meeting on June 1, 1910, the directors had to take up a collection to help defray the cost of postage. The collection yielded 25 cents.

Yet the business climate for the 100-year-old Winona company seems remarkably better than those first few meetings.

On Saturday, the foundry which was originally started in Racine, Wis., celebrated its 100-year anniversary with a tour for employees’ family and friends and a cookout.

Most Winonans have driven by the Mark Street plant. Few know what goes on inside. Still, Callender said, that doesn’t stop some from making assumptions — like the foundry must be a dark, dingy place, or that the smoke coming from the stacks must be laden with pollution.

Tour groups walked through the 135,000-square-foot facility that has a good amount of natural light, swept floors and fresh air constantly flowing through it.

Even fewer know about  the pits of scrap iron in the back. More than 90 percent of the foundry’s iron comes from places like nearby Miller Scrap.

Old brake drums and engine blocks from Winona become part of the next industrial centrifugal air conditioner compressors for Trane.

Badger Foundry has more than 80 clients, yet like so many Winona manufacturers what’s being built inside aren’t everyday household products. However, the names are familiar — Caterpiller, Trane, Allison Transmissions.

The Winona foundry employs around 150 people currently. That number can vacillate to as many as 200, sometimes it can even dip below 100.

Regardless of numbers, Badger is becoming a rarity — not only for its length of business, but staying in business.

Callender himself is a testament to the employees. He’s been there since 1954 when he worked in the foundry as a summer job. His grandfather bought a controlling amount of stock in the company in 1912, and his father, Richard Callender, followed.

“It’s cliche, but it’s in the blood,” he said. “There’s just something about making something with metal.”

Callender called Ladewig one of the best molders in the business.

Ladewig was with the company when it was on Second Street.

“The old core room was ice cold in the winter and too hot in the summer,” Ladewig said.

He remembers the 1965 flood when there was four feet of water in that same room. He also remembers moving the foundry to its current location in 1973.

“That was a lot of work. It took us what? Three or four months just to move everything and get it all set back up,” Ladewig said.

“I’ve driven by so many times and never completely understood the casting and cores — it’s really complicated,” said Mae Kramer.

Kramer’s two sons, Bill and Tom, work at the foundry.

“The foundry gets such a bad rap environmentally,” said Lisa Schell, whose husband is the human resources manager. “Yet, they do so much recycling and have so many environmental controls.”

One of those controls is a recently built $1.3 million  baghouse that continues to filter the air and remove the pollution particles.

Badger Foundry makes iron products from 100 to 5,000 pounds. It uses an estimated 1,200 tons of iron per month. That’s more than 28 million pounds per year.

“It used to be that foundries rarely shipped beyond 40 to 60 miles,” Callender said.

A huge coke furnace has streams of water trickling down the sides, keeping them from melting. The core temperature can rise to as much as 3,500 degrees.

Another electric furnace keeps the molten metal at 2,700 degrees for the castings.

“I came back for the people and the work ethic,” Sullivan said.

That forms the core of Badger’s philosophy.

“Our product is iron, our strength is our people,” Callender said. “That’s why we’re still here.”

The tallest cliff in the Solar System is one steep drop

WH turns focus to getting Under 30 vaccinated

WH turns focus to getting Under 30 vaccinated

Psaki: The fight for voting rights 'is not over'

Psaki: The fight for voting rights 'is not over'

Steamboat Days organizers have released the winners of some of their annual events from this past weekend's festivities.

Steamboat Days kicks off in Winona

The 74th annual Steamboat Days kicked off Wednesday in Winona after a break last year due to COVID-19.

Frank Kuncz, a casting and engineering manager at Badger Foundry, explains the basics of the casting process used at Badger Foundry Saturday during a tour offered to family and friends of employees during the celebration of the company's 100 year anniversary. Rory O'Driscoll/Winona Daily News