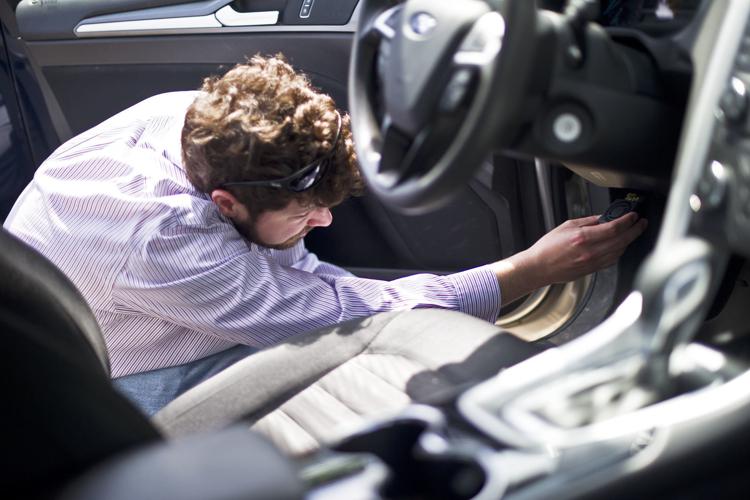 John Howard, sustainability coordinator for the city of Winona, plugs a data logger into a city vehicle as part of a study on the viability of electric vehicles. 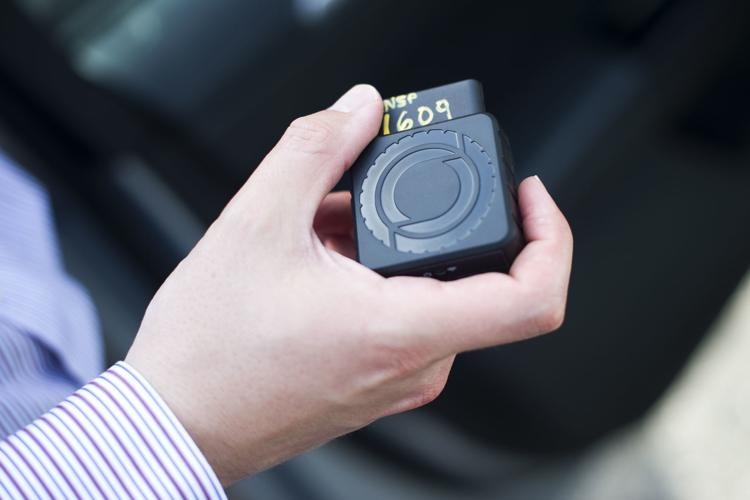 John Howard, sustainability coordinator for the city of Winona, holds device used to collect vehicle usage data as part of a study on the viability of electric vehicles.

Electric vehicles are the way of the future, John Howard, sustainability coordinator for the city of Winona, said.

This month, the city began a yearlong study into the viability of adding electric vehicles to the city’s fleet.

Using data loggers plugged into the dashboards of 20 city vehicles, FleetCarma, the company hired to complete the study, will collect usage data from the vehicles. This data will include how often the vehicles are used, the average distance traveled, fuel economy, time spent idling and more.

“The overall objective is to find out which of our vehicles would be good candidates for electric vehicles,” Howard said. “I am excited to see this move forward.”

Thanks to a grant from Xcel Energy, the $13,660 study will come at no cost to the city.

According to Howard, electric vehicles have the potential not only to make Winona more sustainable by cutting energy consumption, but they could save the city a considerable amount of money in fuel and maintenance costs.

“They are much more energy efficient,” he said. “Maintenance on electric vehicles is a lot easier.

“It tends to save money in the long term.”

Winona isn’t the first community to participate in the study.

Earlier this year the Elk River City Council voted to lease a Mitsubishi Outlander Hybrid and purchase a Chevrolet Bolt electric car for the municipal utility after receiving the results of a FleetCarma study conducted on 20 sedans, SUVs and trucks.

According to Tom Sagstetter, the conservation and key accounts manager for Elk River Municipal Utility, the study provided them the information they needed to make an educated decision.

“Elk River is known as energy city, so we try to be on the leading edge of new technology, but we also want to make sure we are spending money wisely,” he said.

According to the results of the study, Sagstetter said, 85 percent of the time vehicles were driven fewer than 50 miles and no more than 100 miles in a day. That’s well within the range of electric vehicles available today.

Sagstetter said it was ultimately the cost savings that lead to the decision to purchase one vehicle and lease the other.

“Depending on the vehicle, the total cost of ownership savings ranged from $3,000 to $15,000,” he said, adding that the fuel savings was the biggest benefit over a conventional vehicle.

Sagstetter said based on an average cost of 12 cents per kilowatt-hour, the Bolt cost just pennies per mile.

Introducing an electric vehicle to the city’s fleet would require the installation of the infrastructure to support it — namely charging stations.

He said later this year the city will apply for a grant from the Minnesota Pollution Control Agency, which could help to offset the cost of installing chargers.

“Fifteen percent of those funds are being allocated toward electric vehicle infrastructure,” Howard said, adding that installation of chargers could ease the adoption of electric vehicles in the region.

“I’ve gotten a few calls from a few electric vehicle owners asking about how they can get down here,” he said.

While the study will provide insights into the viability of the electric vehicles, Howard said the city is under no obligation to purchase one.

“There are certainly budget constraints to replacing any new vehicles, but as our fleet ages and needs to be replaced, we may look at electric options,” he said. “I think the data will be more useful for more than electric vehicles.”

Howard said the study might find that a vehicle isn’t being used enough to justify replacing it or that a large SUV or truck could be replaced with a smaller more efficient vehicle.

More than half of Americans living paycheck to paycheck

More than half of Americans living paycheck to paycheck

John Howard, sustainability coordinator for the city of Winona, plugs a data logger into a city vehicle as part of a study on the viability of electric vehicles.

John Howard, sustainability coordinator for the city of Winona, holds device used to collect vehicle usage data as part of a study on the viability of electric vehicles.