On a dairy farm in rural Eyota, Minn., a day-old calf wobbles up to a robotic feeding stall. An RFID reader scans the tag clipped to the calf’s ear and measures the amount of milk allotted to the baby as she drinks from the feeder.

In just a generation or two, farmers have embraced high-tech advances in their fields and barns.

But those advances led to a sharp increase in production in the midst of a trade war with two of the U.S.’s largest dairy export markets. That has left many American farms awash with excess product and no one to sell it to. However, the economy of scale has kept some larger dairy producers afloat.

“There’s been a crazy amount of technology added to farming,” said Dana Allen-Tully, a manager and operator of the multigenerational Gar-Lin Dairy Farms Inc. “We can access our cow files on our phone, I can look up a specific cow on my phone, or I can see what the feeders are doing on my phone.”

The automatic feeders allow calves to have multiple, smaller meals throughout the day to mirror the feeding schedule they would have if they were out in the pasture with their moms.

Each calf is fitted with an ear tag shortly after it’s born that has an identification code, similar to a Social Security number, that can be scanned by the automatic feeder when the baby approaches the milk distribution stall.

Information associated with that code, such as how much a calf should eat and when it should eat, is transmitted to the feeder and governs the flow of milk through the dispenser.

Data from robotic feeders is fed back to a handheld device, where supervisors can monitor how much the calves drink and how fast.

“Calf feeding is by far one of the hardest jobs on the farm because it’s so physical. You’re dealing with a calf that weighs 100 pounds and you’ve got to lift it and work with it, so this was built to improve the environment for the employees too,” Allen-Tully said.

Gar-Lin is an efficient operation. It pasteurizes waste milk to feed to calves, instead of dumping the milk and purchasing milk replacement, and roughly half a mile away Gar-Lin employees harvest hay to feed their herd.

They grow their own to reduce the cost of feed and they use manure from their cows to fertilize their fields.

They’ve become partially independent of external suppliers to keep their cost down and to keep in line with federal EPA regulations that apply to dairy farms of 700 head or more. They have an on-site nutritionist who analyzes the feed and balances rations to optimize milk production as well as cow health and performance.

“Our cows eat a way better diet than I do,” Allen-Tully said, laughing.

Gar-Lin Dairy was purchased by Allen-Tully’s parents from her grandparents in the mid-1970s. At that time, they were milking about 40 cows.

Dana’s parents decided to expand the dairy and by the time Dana graduated from high school, they were milking 300 cows. When Dana returned to the farm after college, her parents had doubled their herd to 600 cows.

In 2006 the herd expanded to 1,100, and from there it’s grown to the current size of 2,000 cows and 45 employees. Allen-Tully attributed the growth as necessary to make a profit in an industry with stagnant milk prices but inflation in equipment and supply costs.

“Consolidation in the dairy industry is happening way faster than I expected it to,” she said. “I don’t think we’ll be considered a ‘big farm’ for very long, I think we’ll be average.”

She noted that the cost structure of products in the market, such as deeper discounts on supplies for producers who buy in larger bulk orders, is driving smaller farmers out of business and prompting mid-size farms to expand to survive.

“I can buy a gallon of teat dip so much cheaper than someone who uses only a gallon, because I buy 275 gallons at a time and they’re going to buy 15,” she said. “I think it’s sad.”

Gar-Lin fills three 6,000-gallon tanks to be shipped per day to manufacturing and distribution facilities.

The dairy’s semi-robotic carousel in the parlor can milk up to 50 cows at a time and 270 cows in an hour. The machine monitors and records the amount of milk each animal produces, as each cow walks on and off the carousel on their own.

They send their milk to Land O’Lakes, which sells dairy products internationally through partnerships with major food manufacturers across the globe.

“I think trade has affected us, but the issues that they’re trying to fix should have been fixed a long time ago,” Dana said.

She hopes Congress will pass the trade agreement with Mexico and Canada and noted that Mexico received more dairy products from the United States than any other trading partner before the trade war.

“We’ve got a lot more product in the country than what we would have had before” and that additional product within the U.S. leads to the surplus that helped to drive the cost of milk down, she said.

“The ag economy is in a tough spot, so hopefully we’ll see some price recovery.”

In La Crosse, 60 miles southeast of the Gar-Lin Dairy, Dona Goede, Brad Sirianni and Aimee Schomburg, farm business management instructors at Western Technical College, sat around a table in a conference room looking over years’ worth of milk production numbers.

Each has experience with the fluctuation of the ag and dairy market. Sirianni farms 170 acres of land in Trempealeau County to supply feed to dairy farmers; Schomburg milks 130 cows and farms roughly 220 acres to feed her herd; Goede’s in-laws are getting ready to expand their organic farm into the organic dairy industry as a way to use leftover hay supplies.

Sherry Wuebben sat in an empty conference room with papers splayed out on the table.

Goede said her in-laws crunched the numbers and decided to invest in the kind of cattle that will produce milk high in butterfat, proteins or components that lend themselves well to cheese production.

“You need to supply the market with what it wants, and we’re in Wisconsin so it’s cheese. By jumping in on organic and the components with high butterfat, every time we do the cash flows, it works for that operation,” Goede said. “The farms that we have struggling right now from what I see are the ones that aren’t willing to give the market what they want.”

Schomburg nodded in agreement, as her newborn daughter cooed in the background.

“As long as you’re going to be in the industry, you have to be willing to be flexible,” Schomburg said. She and her husband purchased their farm just last year from family members but she questioned whether that was the right decision for her family.

During the past couple of years, the base milk price has not met the cost required by most farmers to produce, leading them to lose money. Net incomes have either declined or are negative.

“That means people are leaving unpaid bills out there,” Sirianni said.

Ryan Dunnum had tears in his eyes as he looked over the empty milking parlor that he built. …

Both interest rates and debt rates are increasing across the ag and dairy industry. A large number of farms can’t afford to buy new equipment, so they try to repair the equipment they have but can’t afford to pay their repair bills, Goede said. The crisis has spread throughout other aspects of the rural economy.

“(Equipment dealers and repair shops), feed dealers, fertilizer, dairy supply,” Goede said. “The ag economy is such a huge driving force for our rural communities, without farms you’re going to see a lot of the businesses disappear.

“That’s what a lot of our farms are facing, how do you pay off a 22% interest feed bill, when you still have to feed the cows. You still have to buy more feed but now you’re paying 20-22% more on a feed bill because you can’t pay it every month.”

Despite the numbers and the crippled market, Goede, Schomburg and Sirianni remain hopeful. Like Allen-Tully, they see evidence of a government that’s trying to fix things that should have been fixed a long time ago in regard to fair prices in international trade agreements.

“I think we’re going through a painful fix,” Sirianni said.

The plan, which he’ll introduce to the 116th Congress, includes components that will combat farm consolidation, boost conservation and agriculture innovation and support beginning farmers and ranchers, among other measures.

Kind said he is working on almost a daily basis with President Donald Trump’s trade team to try to end the trade war and reopen international markets.

In the early hours of June 8th, President Trump sent out a tweet that read, “MEXICO HAS AGREED TO IMMEDIATELY BEGIN BUYING LARGE QUANTITIES OF AGRICULTURAL PRODUCT FROM OUR GREAT PATRIOT FARMERS!”

But Kind and his colleagues on Capitol Hill have been left in the dark regarding what the new deal with Mexico will entail.

“We have gotten zero information about any details of this secret deal with Mexico, other than the president not moving forward on another threatened round of tariffs,” Kind said. “I think it’s important that we do get back to a level of trust and reconciliation because Mexico and Canada, they’re two of our largest trade partners.”

The lack of information regarding the deal mentioned by President Trump on Twitter prompted Sen. Tammy Baldwin, D-Wisconsin, to pen an open letter to the president demanding details of this deal to be released to the public.

In her letter Baldwin wrote, “(Wisconsin farmers) need the full details of the agreement in order to inform the many decisions they must make that affect their livelihood and business.”

Winona man searching for kidney donor before it's too late

A Winona man is in urgent need of a new kidney.

NOSH Scratch Kitchen has become a bit of an enigma in the Winona community.

Enrollment dropped by 35 students in the Winona Area Public Schools from January to February. 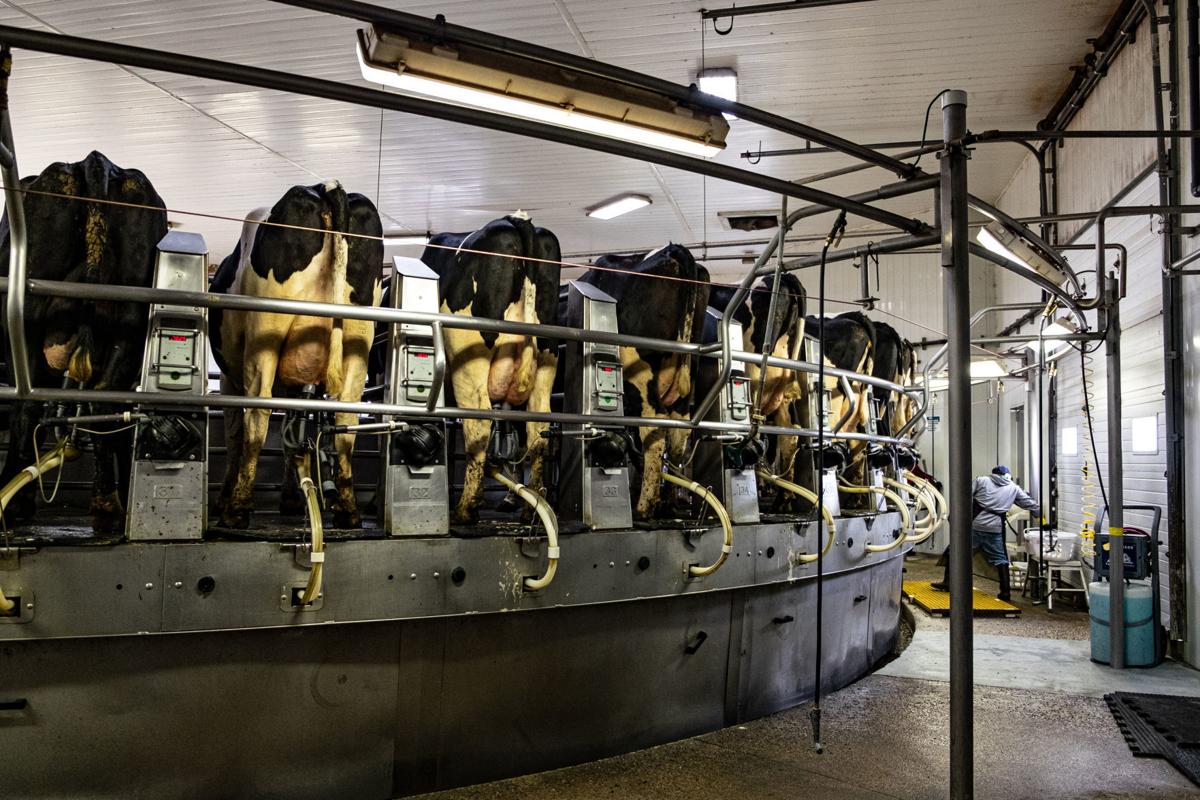 The carousel in the Gar-Lin milking parlour rotates as an employee cleans the equipment and the cows. The cows are able to enter and exit the device of their own accord. 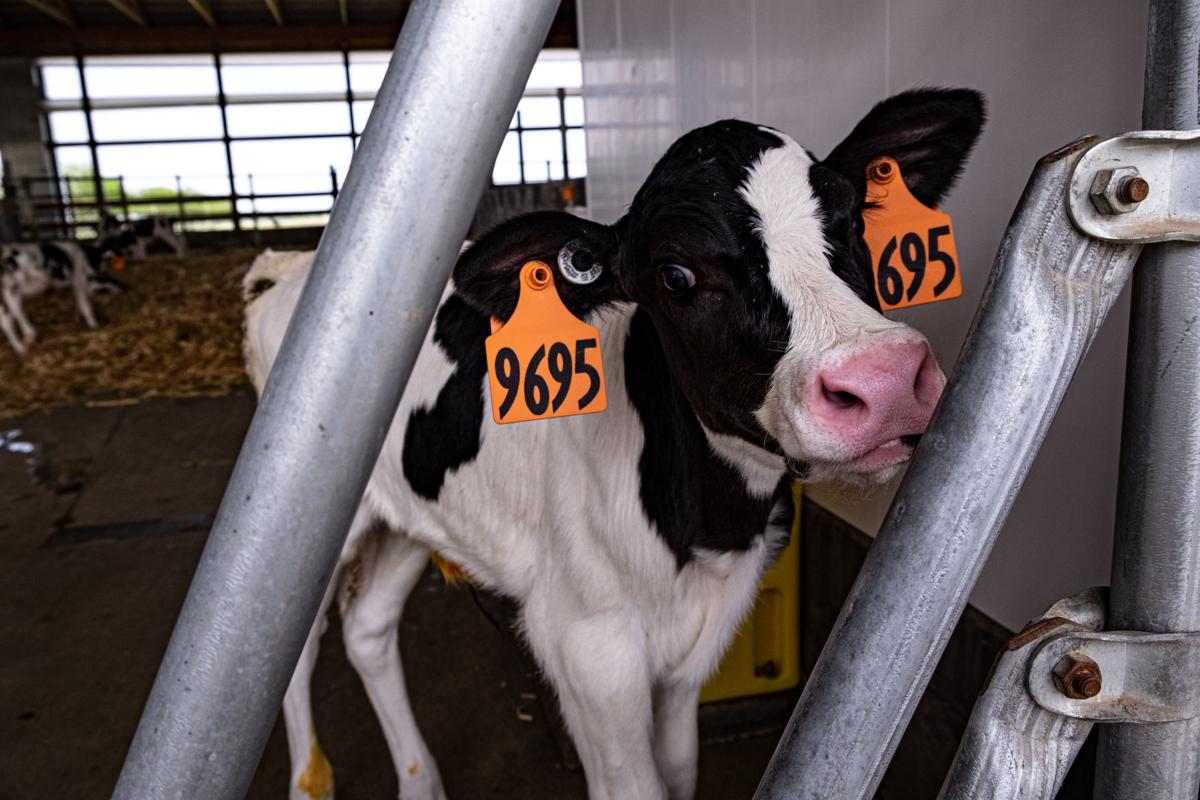 A baby cow with an RFID tag on the inside of her ear checks out visitors to the calf barn. 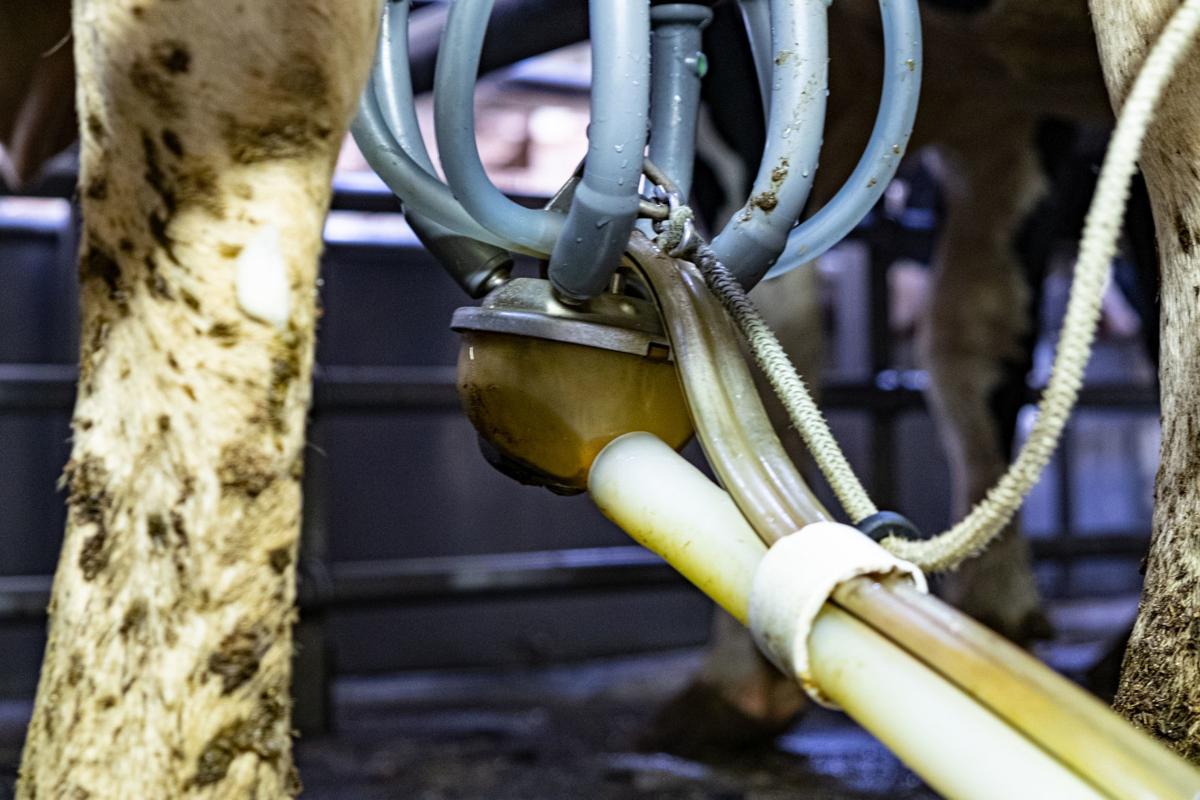 An up-close and personal look at the milking device, which is placed onto the udders by employees. The device washes and sanitizes the udder before milking begins. The machine records the amount of milk provided by the cow and once the cow is finished, the device removes itself from the udder. 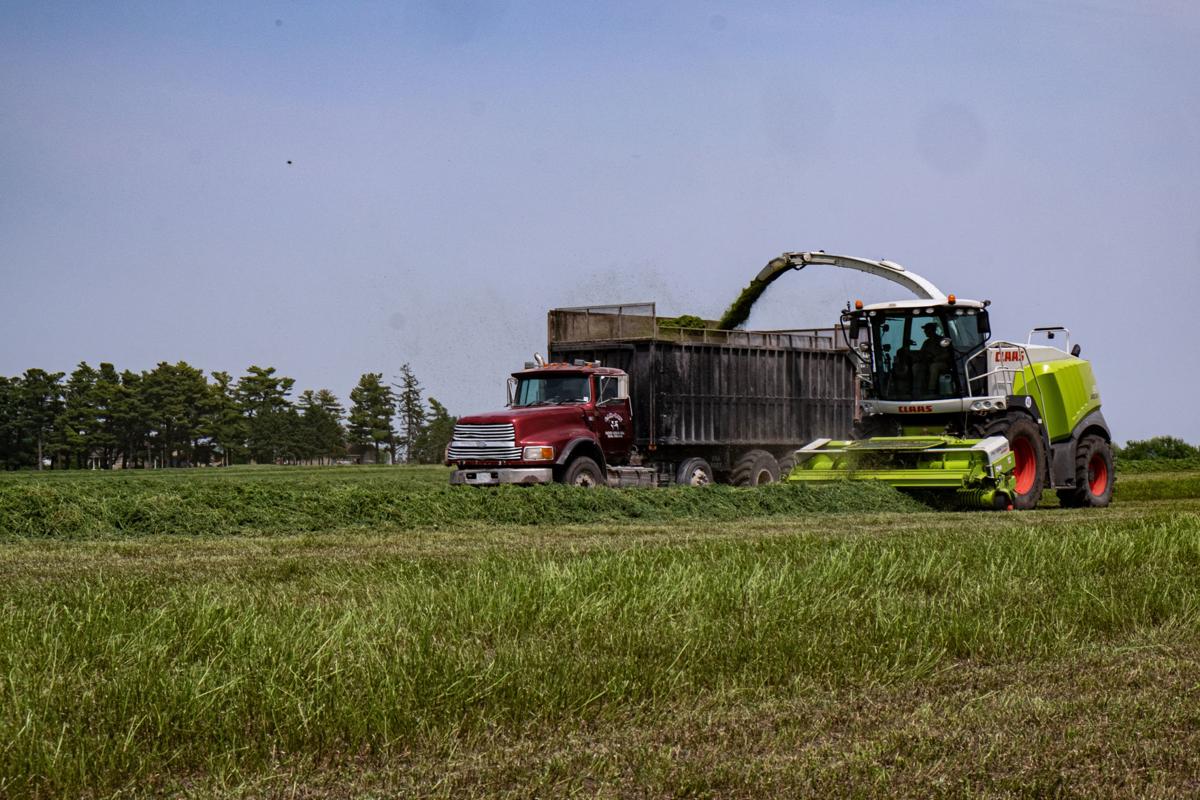 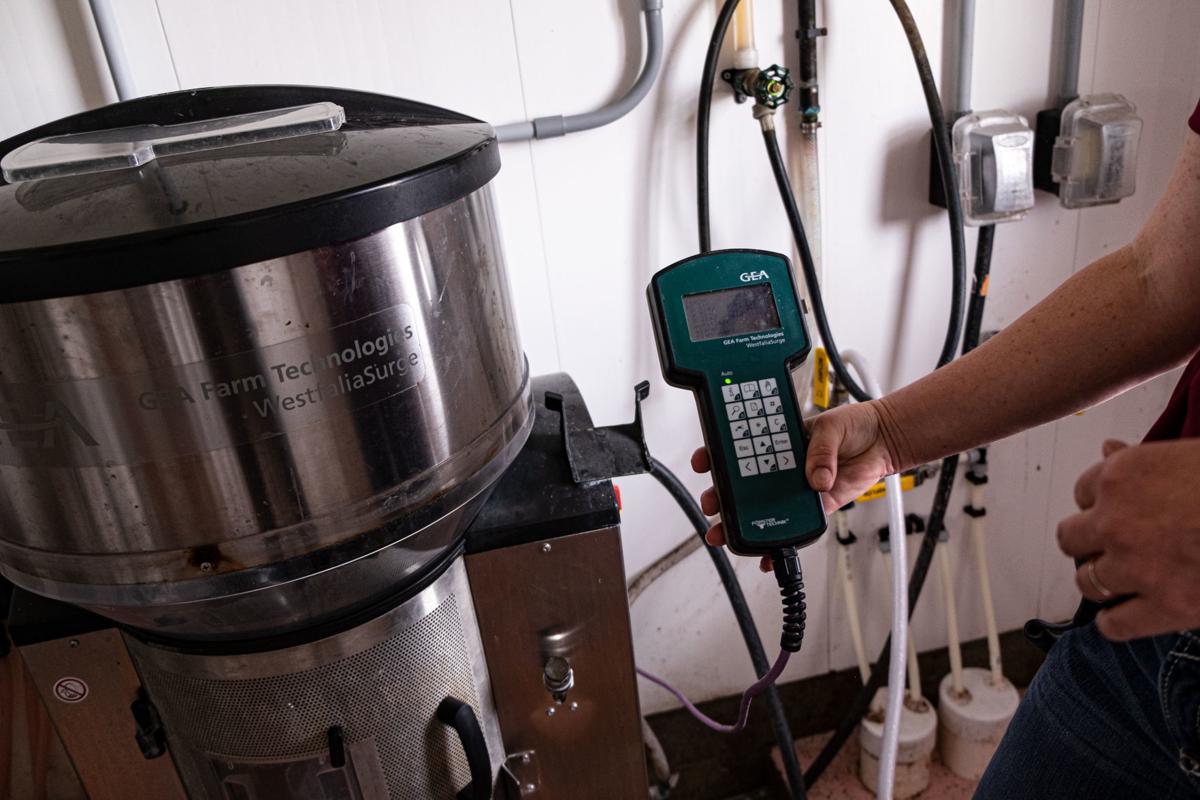