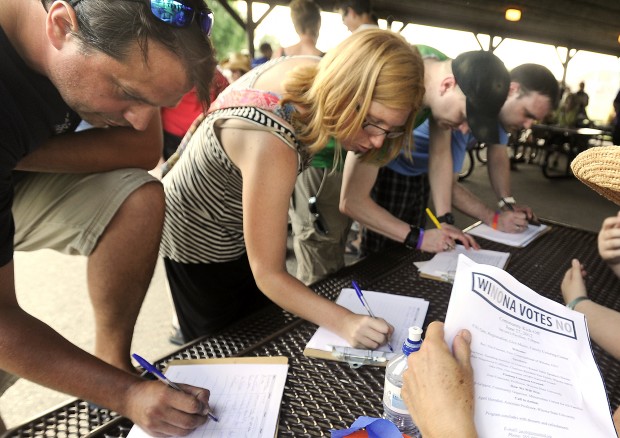 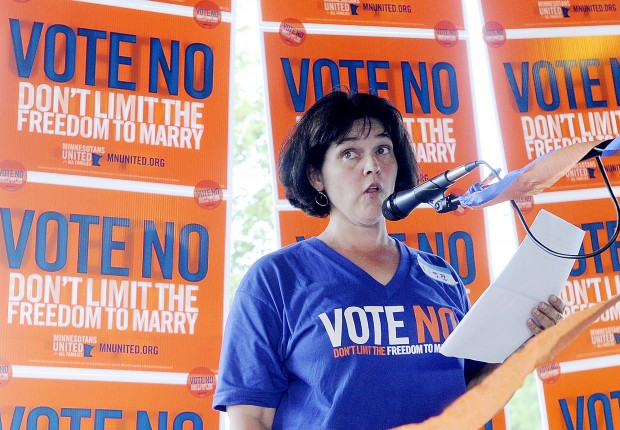 About 100 area residents supportive of gay marriage filled the Jaycee Pavilion at Lake Park on Wednesday evening, rallying to defeat the proposed amendment to the Minnesota Constitution that would define marriage as between a man and woman.

“This amendment doesn’t create any jobs. It doesn’t help any families. Instead, it ensures that some Minnesotans wouldn’t be able to share the same liberties as other Minnesotans,” said Mike Slagenweit-Coffman, a Winona native and chaplain resident in Eau Claire, Wis.

He was one of several speakers at the event sponsored by Minnesotans United for All Families — an organization running a statewide campaign against the amendment — who told audience members why he will vote no in November, explaining how after seminarian school he fell in love with the man who would become his husband.

The two men were married in 2010 in Washington D.C., where their marriage legally is recognized, Slagenweit-Coffman said.

“Take a stand for love,” he encouraged. “Know that this amendment to our constitution only creates barriers for love.”

It was a theme echoed by some audience members and other event speakers.

“I don’t believe the Constitution is used to take people’s rights away,” audience member Dan Debroux said before the event.

Instead, Debroux said, the document should be used to state what Minnesotans can do.

“We need to be protecting and expanding freedom, not restricting it,” said Rev. Tim Forester of the First Congregational Church of Winona.

The statement drew loud cheers and applause from those seated on nearly every picnic table in the shelter.

Trees and power lines knocked down by Ian