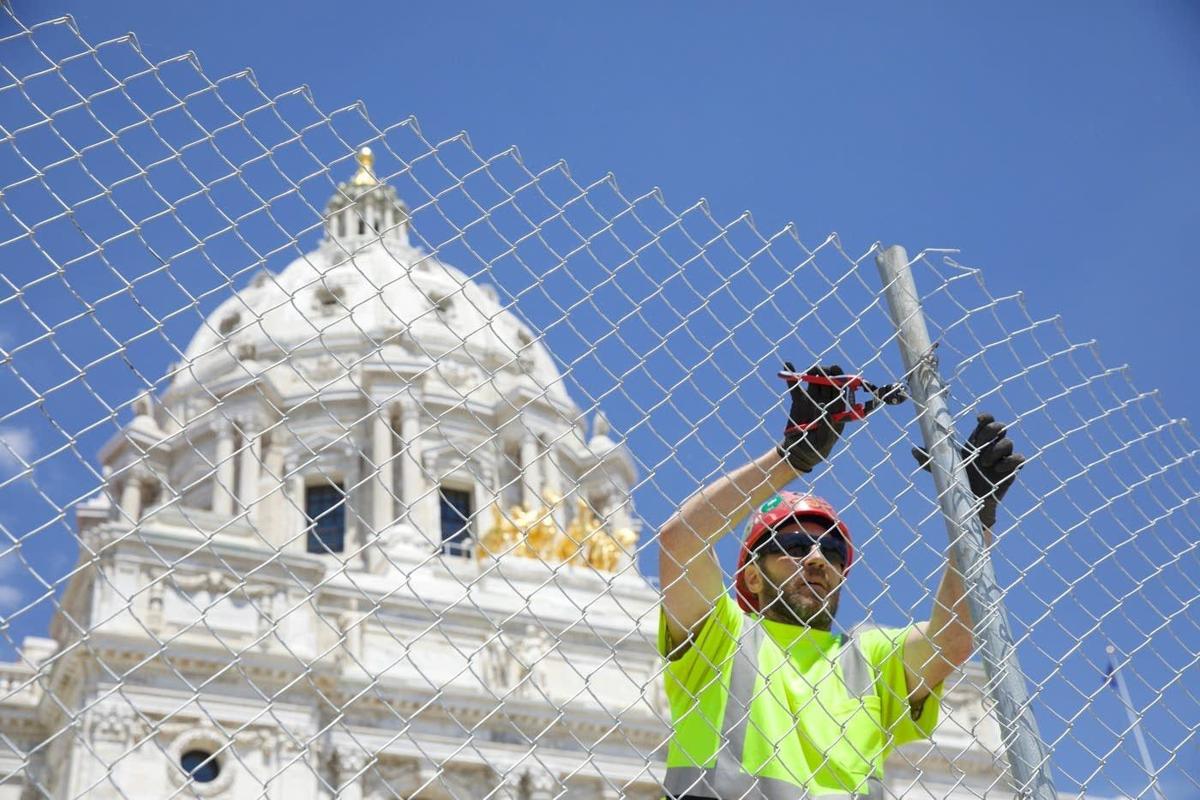 Joe Becker with Keller Fence cuts zip ties holding a fence together outside of the Minnesota State Capitol on Tuesday, June 1. 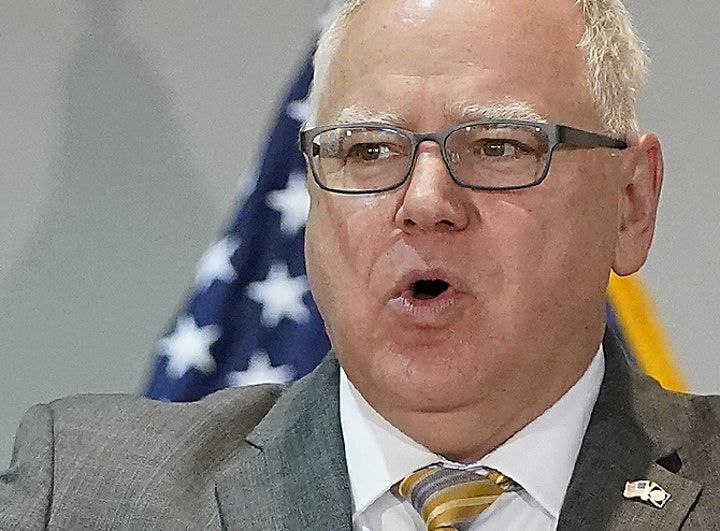 Gov. Tim Walz is expected to call the Legislature back to the Capitol on June 14 for a special session. 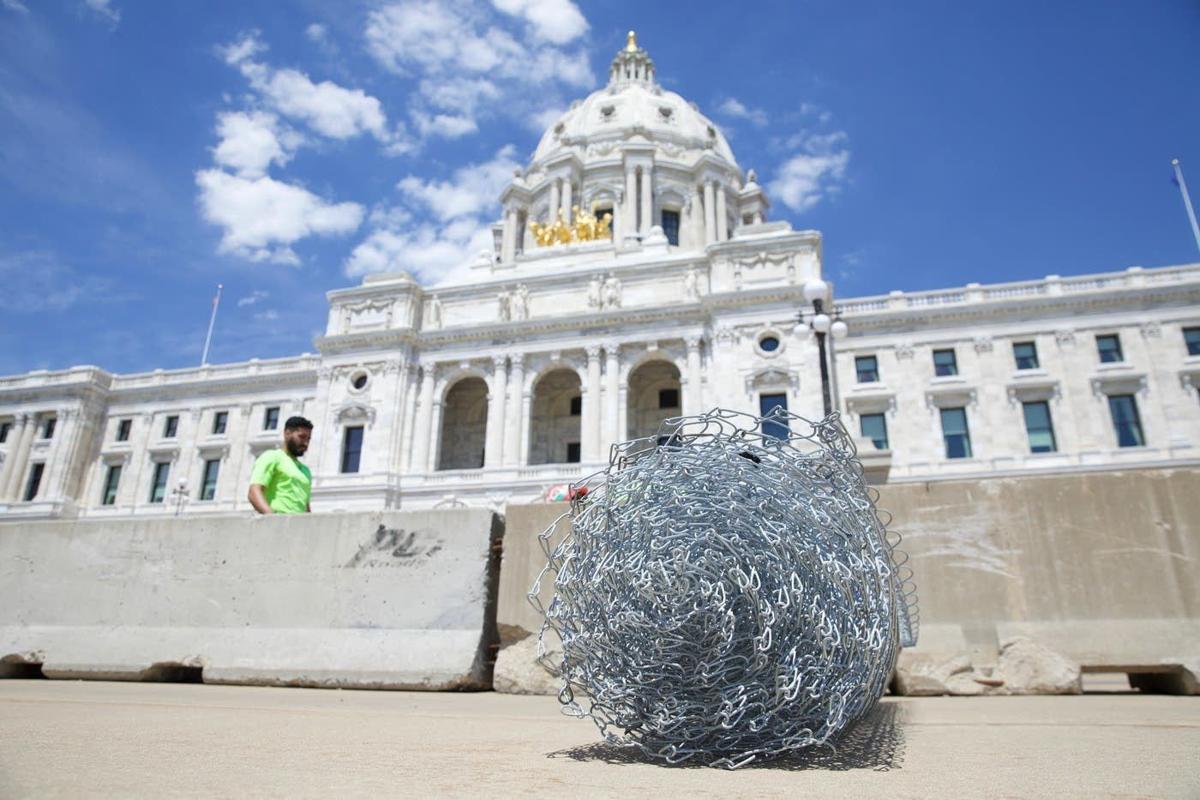 A roll of chain link fence sits in front of the Minnesota State Capitol in St. Paul as the barriers around the building are taken down on Tuesday, June 1.

State leaders remain adamant that they can avoid a government shutdown that could prove far more problematic than Minnesota’s last closure a decade ago, which cost taxpayers at least $85 million and put 19,000 people out of work.

Lawmakers need to pass a new budget before July 1 to prevent a shutdown and are behind schedule as they race to beat the clock. Meanwhile, the expenses that come with closing down state government already are starting to add up.

The state has redirected staff to focus on shutdown planning and spent $30,000 on letters notifying 38,000 workers of possible layoffs, said Minnesota Management and Budget Commissioner Jim Schowalter. He said another round of mailers is expected to go to contractors this week.

“Each day we’ll keep on bumping into new issues and concerns,” Schowalter said. “A shutdown doesn’t just happen on June 30. It happens well before then, and we’re starting that work and expense right now.”

Lawmakers are working through the weekend to try to sort out differences over the state’s $52 billion budget. DFL Gov. Tim Walz and leaders reached an overall budget deal on the day the regular session ended in mid-May, but many spending and policy disagreements remain.

Walz is expected to call the Legislature back to the Capitol on June 14 for a special session. As that date nears, lawmakers have blown past self-imposed deadlines to get their work in order, including the goal of having all budget bill language wrapped up Friday. Only one of the 14 met the deadline, which was the bill funding Legacy Amendment programs. Legislators nonetheless were optimistic they could wrap up the budget this month, although they had differing opinions on how many days they will need once they return to St. Paul.

House Ways and Means Chairwoman Rena Moran, a Democrat from St. Paul, said she hopes it takes just “one to three” days to complete everything in a special session. She said they have to start reaching compromises this weekend so legislative staffers have time to prepare the budget bills by June 14.

Moran’s Senate counterpart, Republican Sen. Julie Rosen of Fairmont, said she anticipates the Legislature will need the full month of June to finalize the budget. Spending details are being held up in large part because of political divisions over policy issues such as police reform, vehicle emissions standards, election law changes and Walz’s emergency powers. At some point they need to set aside some of those priorities, Rosen said, and after that deals can come together “very, very fast.”

So far, key legislators assigned to work on broad spending areas such as public safety, early childhood through high school education and health and human services have been leading budget negotiations. However, Rosen said Democratic House Speaker Melissa Hortman and Republican Senate Majority Leader Paul Gazelka are going to have to step in to reach agreements and avoid a shutdown.

“People have been sucker-punched the last year. They don’t need a shutdown on top of it, just when everyone is starting to feel good, getting out there — spirits are high. I agree that we can get this done. It’s going to take the leadership, probably, to start knocking some heads together,” Rosen said.

The state’s last shutdown, in 2011, lasted 20 days — the longest to date. But even a short shutdown this year could create significant problems. The state Supreme Court ruled in 2017 that the courts should not be appropriating state dollars. Court involvement in the past meant that 80% of state spending continued during a shutdown.

The state is still doing its homework on how a shutdown would impact staffing, Schowalter said.

Walz has raised concerns about critical services, like the operation of state prisons, but said that has to be “further adjudicated.”

In the meantime, agencies like the Minnesota Department of Transportation have started preparing for work to stop. MnDOT spokesman Jake Loesch noted that pausing construction projects requires significant planning — they need to remove equipment and create safe traffic configurations, among other details — and a shutdown could cause major project delays. The 2011 shutdown resulted in $35 million in additional MnDOT costs, he said.

State leaders were quick to spread blame for the relative lack of budget action last week.

“We need the Senate to come to the table in good faith and hammer things out,” Moran said. They have to ensure the budget is fair and addresses needs in Minneapolis and St. Paul, which she said, “has been a real sticking point.”

Walz said it is “unacceptable” for legislators to fail to reach a compromise.

He said he has been willing to set aside proposals that were nonstarters for Republicans.

“It would be incredibly disruptive to Minnesotans, and at a time when our finances are solid, our reserves are solid,” Walz said during an event Thursday at the Minnesota Zoo, one of many state entities that would be affected by a stalemate. “The last thing anybody should be talking about or threatening is a government shutdown. We’re already way past the time this should have been done.”

However, Gazelka said the governor should be engaging the DFL-controlled House.

“The Senate has no issues that we would demand a shutdown to get,” Gazelka said Thursday.

“My concern is that the governor needs to work with the House to make sure they don’t have any issues that they would shut down the government over.”

CALEDONIA, Minn. — There might have been a little extra spring in Eli King's step as he roamed, dribbled and shot a basketball in the Caledoni…

When I opened the door to this column a couple of weeks ago, I was hoping a number of you would walk through and enlighten me with insight and…

Joe Becker with Keller Fence cuts zip ties holding a fence together outside of the Minnesota State Capitol on Tuesday, June 1.

Gov. Tim Walz is expected to call the Legislature back to the Capitol on June 14 for a special session.

A roll of chain link fence sits in front of the Minnesota State Capitol in St. Paul as the barriers around the building are taken down on Tuesday, June 1.