Here's a look at trending topics for today, June 22.

In an early-morning tweet, the Bergen County prosecutor's office said that its major crimes unit and the Edgewater Police Department are investigating a shooting with two victims that occurred around midnight Wednesday at 14 The Promenade, a shopping plaza in Edgewater.

TMZ reported Wednesday that one of the victims was the 21-year-old rapper and that he was undergoing surgery. The extent of his wounds and his condition were not yet known.

Representatives for the rapper, whose given name is Tione Jayden Merritt, and for the prosecutor's office did not immediately respond Wednesday to The Times' requests for comment.

Ferguson, nicknamed “Sack Daddy,” played three NFL seasons, all with Baltimore. He set the career sacks record in the college Football Bowl Subdivision (45) when he played at Louisiana Tech.

Police said the cause of death is still to be determined.

“On June 21, 2022, at approximately 11:25 p.m., Northern District patrol officers responded to a home in the 400 block of Ilchester Avenue for a report of a questionable death,” Baltimore police said. “Once there, officers located 26-year-old Jaylon Ferguson, unresponsive, being treated by medics. Ferguson never regained consciousness and was pronounced dead on the scene by medics. No signs of trauma was found or foul play suspected at this time."

Read more about it here:

In the most newsworthy aspect of "The Umbrella Academy's" third season, the Netflix series incorporates Elliot Page's transitioning into the story, a moment that's addressed sensitively and relatively early.

Beyond that, the show descends from its second-season cliffhanger into an ever-more-convoluted world of shifting timelines, battling super-teams and existential dangers, presented with plenty of goofy humor and irreverence but as the strange new elements pile up, increasingly aimed at what feels like a hardy band of loyalists with the patience to keep pace.

The quake was Afghanistan’s deadliest in two decades, and officials said the toll could rise. An estimated 1,500 others were reported injured, the state-run news agency said.

The disaster inflicted by the 6.1-magnitude quake heaps more misery on a country where millions face increasing hunger and poverty and the health system has been crumbling since the Taliban retook power nearly 10 months ago.

Juul vape pens could be pulled from US shelves. Altria shares tumble

Mayim Bialik's experience with Covid-19 is 'no joke'

Olivia Rodrigo has been dating Zack Bia since February

Afghanistan's state-run news agency reported a powerful earthquake struck a rural, mountainous region of the country's east, killing 1,000 people and injuring 1,500 more. Wednesday's quake was the country's deadliest in two decades. Officials warned that the already grim toll may still rise. Information remained scarce on the magnitude 6.1 earthquake near the Pakistani border. But early footage from villages tucked among the rough mountains showed residents picking through rubble of collapsed stone and mud-brick houses. The disaster posed a major test for the Taliban-led government. The Taliban seized power last year as the U.S. and its allies were withdrawing from the country.

Katie Britt has won the Republican nomination for Senate in Alabama, defeating six-term Congressman Mo Brooks in a primary runoff after former President Donald Trump endorsed and then un-endorsed him. The loss ends a turbulent campaign for Brooks, a conservative firebrand who had fully embraced Trump’s election lies and had run under the banner “MAGA Mo.” But it wasn’t enough for the former president, who initially backed Brooks in the race to replace retiring Sen. Richard Shelby, but then rescinded his support as Brooks languished in the polls. Trump eventually endorsed Britt in the race’s final stretch after she emerged as the top vote-getter in the state’s May 24 primary.

Biden calls for 3-month suspension of gas and diesel taxes

President Joe Biden is calling on Congress to suspend federal gasoline and diesel taxes for three months — an election-year move meant to ease financial pressures. But it's not clear Biden has the votes to suspend the taxes. Many lawmakers in his own party have expressed reservations. Biden says he knows the move wouldn't reduce “all the pain but it will be a big help.” If the gas tax savings were fully passed along to consumers, people would save roughly 3.6% at the pump. Prices average about $5 a gallon nationwide. Biden also wants states to suspend their own gas taxes or provide similar relief.

Senate bargainers have reached agreement on a bipartisan gun violence bill. That potentially tees up congressional passage this week on an incremental but notable package that would stand as Congress’s response to mass shootings in Texas and New York that shook the nation. Senate Majority Leader Chuck Schumer, D-N.Y., predicted Senate approval later this week, and passage by the Democratic-led House could follow quickly. It would make background checks tougher for the youngest gun buyers and bolster spending for school safety and mental health programs, and bar gun ownership by romantic partners convicted of domestic abuse.

The House Jan. 6 committee has heard chilling, tearful testimony that Donald Trump’s relentless pressure to overturn the 2020 presidential election led to widespread threats against local workers and state officials. The panel focused Tuesday on the “heroes” of democracy — election workers and officials who fended off the defeated president’s demands. The committee is focused on Trump's schemes to reject state tallies and electors, all fueled by his false claims of election fraud. It heard from Arizona’s Republican state House Speaker Rusty Bowers and Georgia Secretary of State Brad Raffensperger about pressure from Trump, including Trump’s call asking the Georgia official to “find 11,780” votes to prevent Joe Biden’s victory.

The head of the Texas Department of Public Safety says three minutes after a gunman entered a school where he slaughtered 19 elementary students and two teachers there was sufficient armed law enforcement on scene to stop the gunman. Yet police officers armed with rifles stood and waited in a school hallway for more than an hour while the gunman carried out the massacre. Col. Steve McCraw, director of the Texas Department of Public Safety, called the police response “an abject failure.”  He says police radios did not work within the school and that school diagrams officers used were wrong.

President Joe Biden is celebrating that virtually all Americans can now get a COVID-19 shot after the authorization of vaccines for kids under 5 over the weekend. Biden on Tuesday visited a vaccination clinic in Washington, where some of the first shots were given to what had been the last major age group ineligible for vaccines. Biden is hailing it as an important a pandemic milestone that that will support the country’s recovery. While anyone age 6 months and up is now eligible for vaccines, the administration is cautioning that it expects the pace of shots for the youngest kids to be slower than older ones, as parents are more likely to rely on their children’s pediatricians to administer them.

A Ukrainian deputy prime minister overseeing the country’s push to join the European Union says she’s “100%” certain all 27 EU nations will approve making Ukraine a candidate for membership in the bloc. In an interview with The Associated Press on Wednesday, Deputy Prime Minister for European and Euro-Atlantic Integration Olha Stefanishyna said the decision could come as soon as Thursday. She says countries that had been skeptical about starting accession talks while Ukraine is fighting Russia’s invasion are now supportive. Granting a country EU candidate status requires unanimous approval from existing member nations. Candidacy is the first step toward membership. It doesn't provide security guarantees or an automatic right to join the bloc.

Crowds flock to Yellowstone as park reopens after floods

Throngs of tourists have gleefully returned to watch geysers erupt and bison cross roads at Yellowstone National Park as it partially reopens following destructive floods. Park managers raised the gates Wednesday at three of Yellowstone’s five entrances for the first time since June 13. That day, 10,000 visitors were ordered out after rivers across northern Wyoming and southern Montana surged over their banks following a torrent of rainfall that accelerated the spring snowmelt. The cost and scope of the damage is still being assessed.

Civil trial jurors have found that Bill Cosby sexually abused a 16-year-old girl at the Playboy Mansion in 1975. The Los Angeles County jury delivered the verdict Tuesday in favor of Judy Huth, who is now 64, and awarded her $500,000. The jury’s decision is a major legal defeat for the 84-year-old Cosby. It comes nearly a year after his Pennsylvania criminal conviction for sexual assault was thrown out and he was freed from prison. Cosby did not attend the Los Angeles trial. He has repeatedly denied Huth’s allegations that he forced her to perform a sex act at the mansion.

Westminster dog show gets 4 finalists, and one has NFL ties

A bloodhound, a French bulldog, a German shepherd and a Maltese have been chosen to advance to the final round of the Westminster Kennel Club dog show. Trumpet the bloodhound, Hollywood the Maltese, Winston the French bulldog and River the German shepherd were selected Tuesday night. One of Winston’s owners is NFL defensive lineman Morgan Fox, who was signed last month by the Los Angeles Chargers after six seasons with the Los Angeles Rams and Carolina Panthers. Three more finalists will be selected Wednesday night, when all seven will face off for the coveted best in show prize.

Liya Chu won the MasterChef Junior competition, but she couldn't tell anyone for three years.

Origins story explains why 'Flowers in the Attic' was so dark

Actor Max Irons had no idea why friends looked shocked when he told them he was considering a role in “Flowers in the Attic: The Origin.”

The Splash Mountain rides at Disneyland and Disney World will reopen in 2024 with a theme replacing a backstory viewed as perpetuating racist stereotypes.

Taylor Swift's alleged stalker has been arrested, and a new version of the Queen's "official duties" have been rewritten following her Platinum Jubilee. Get more celeb news here.

Judge Ketanji Brown Jackson will be sworn in as the 116th Supreme Court justice and the first Black woman on the court. Watch live here.

The 50 best romantic comedies of all time, according to IMDb

Rom-coms are one of the most popular genres in all of film, and there is no shortage of great ones out there. Here are the best, according to IMDb.

Here's a look at the best movies with a PG-13 rating, according to IMDb.

The singer and songwriter was convicted of racketeering and sex trafficking last year at a trial that gave voice to accusers who had once wondered if their stories were ignored because they were Black women.

🎧 "Minions: The Rise of Gru" hits theaters and "Stranger Things" returns. What should you watch this holiday weekend? Listen to Streamed & Screened for options.

This week's new releases: 'Only Murders in the Building,' Imagine Dragons and more

This week's new releases include an album from Imagine Dragons and the return of Steve Martin, Martin Short and Selena Gomez as unlikely crime-solving neighbors in "Only Murders in the Building."

Did Cardi B just drop the song of the summer?

Did Cardi B just drop the song of the summer? 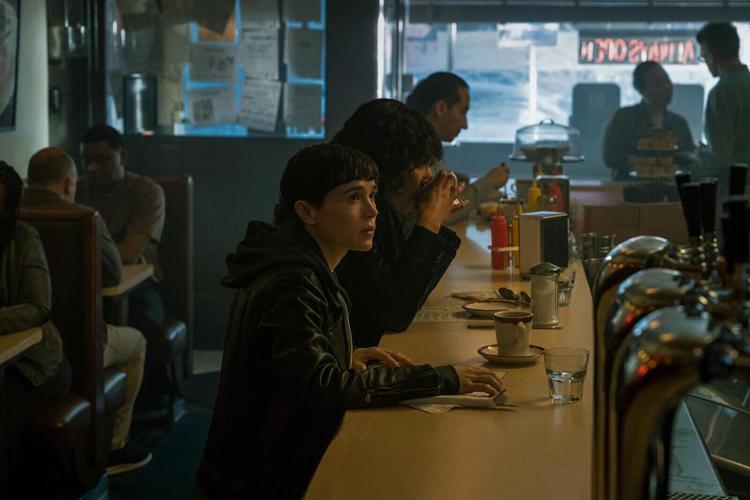 Elliot Page as Viktor Hargreeves in 'The Umbrella Academy' season 3 on Netflix.