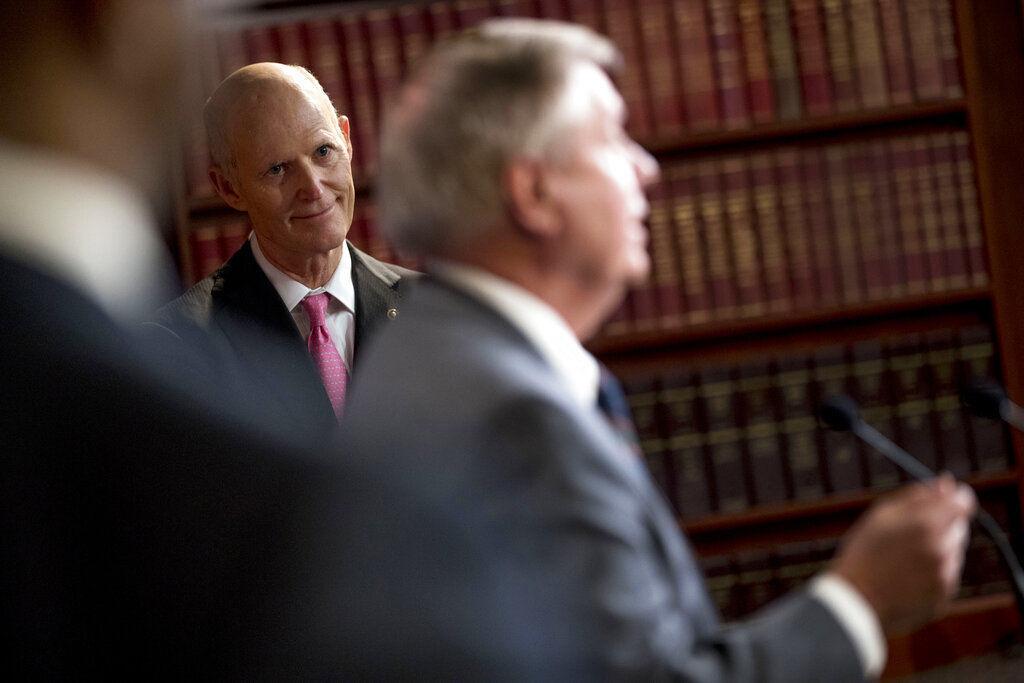 Sen. Rick Scott, R-Fla., left, listens as Sen. Lindsey Graham, R-S.C., left, speaks at a news conference about the coronavirus relief bill on Capitol Hill in Washington, Wednesday, March 25, 2020. Senators discussed what they are calling a "drafting error" in the 2 trillion dollar stimulus bill expected to be voted on today in the Senate. (AP Photo/Andrew Harnik)

Bottles of hand sanitizer made at Tattersall Distilling Tuesday, March 24, 2020 in Minneapolis sit ready for packaging as the company lent an effort to provide the sanitizer, made from a World Health Organization recipe and signed off by the FDA to make available for nursing homes, health centers and first responders fighting the coronavirus. (AP Photo/Jim Mone)

Minnesota Gov. Tim Walz addresses the media during news conference, Wednesday, March 18, 2020, in St. Paul, Minn., where he gave an update on the state's effort to slow down the coronavirus. (AP Photo/Jim Mone)

MINNEAPOLIS — Gov. Tim Walz on Wednesday ordered Minnesota residents in nonessential jobs to stay at home for two weeks in an effort to slow the spread of COVID-19 and prevent the coronavirus from overwhelming the state’s health care system.

The governor’s “stay at home” order begins at midnight Friday and runs through April 10. He said the restrictions were critical to allow the state to protect its most vulnerable people and give time to build up the state’s capacity to handle a flood of infections.

“I’m asking for your patience, your cooperation and your understanding,” Walz said in a live video message. “My pledge to you is to use the valuable time you’re giving us.”

People will still be allowed to go to grocery stores and their doctors and buy gasoline, he said, but the governor extended his earlier order closing bars and restaurants to May 1. Public schools, which are closed, will implement distance learning plans beginning Monday. He planned to announce more details later Wednesday.

Walz had held off on issuing the order because he wanted to see data and modeling on whether it would make enough of a difference to justify the disruptions.

That modeling showed that increasing residents’ social distancing from the current 50% to 80% would push the peak of the pandemic in the state back to 14 weeks instead of nine, and delay the peak load on intensive care units from six weeks to 11 weeks.

Minnesota has just 235 adult ICU beds at the moment. Walz said the order will buy time to transform arenas and stadiums into hospitals, stockpile ventilators and build up ICU capacity.

“Minnesotans, we’re in this together. I’m asking you to buckle up for a few more weeks here,” he said.

Several other states and countries have issued similar orders to keep people at home as much as possible and close all nonessential businesses. Most states that have imposed such restrictions have allowed people out to go to supermarkets, pharmacies and doctors, or outside for exercise. They’ve also made exceptions for workers deemed essential.

The state’s count of confirmed COVID-19 cases rose to 287 on Wednesday, up 25 from a day earlier, with 26 hospitalized cases, up 11 from Tuesday. Officials have stressed that the real total of Minnesota residents with the disease is much higher because many people don’t qualify for testing. But more than 11,000 people have now been tested in Minnesota, the Health Department said.

For most people, the new coronavirus causes mild or moderate symptoms, such as fever and cough that clear up in two to three weeks. For some, especially older adults and people with existing health problems, it can cause more severe illness, including pneumonia, and death.

Minnesota lawmakers were preparing to return to the Capitol on Thursday to beef up the state’s fight against COVID-19 and help residents cope with the economic hardships. Details of the relief package have not been announced.

Democratic legislative leaders expressed support for the governor’s move, but Republican Senate Majority Leader Paul Gazelka said in a statement that he has “grave concerns about the Governor’s statewide Stay-at-Home order, and the consequences for the families of Minnesota when their jobs and businesses that provide their livelihood are lost.”

The clinic will reopen after the COVID-19 pandemic.

The temporary suspension is necessary to reallocate staffing resources to other critical-care needs in response to the COVID-19 outbreak, as well as ensure the safety of patients and staff.

Other clinics are updating hours due to the pandemic.

Mayo officials say drive-thru testing continues from 9 a.m. to 6 p.m. daily, and says all patients must be screened by telephone before testing.

On a weekday night last week, Joey White stood by the bonfire in his neighbor’s backyard, a Coors Light in one hand and his phone in the other. A dozen friends were joining him, from St. Paul, Eagan and Arlington, Va., via Google Hangout.

This was White’s weekly trivia game, something he and his friends would normally enjoy together at the Minneapolis Cider Co. Now the group was larger, but virtual.

For 30 minutes after the game ended, they chatted about how their jobs were going, and about life under coronavirus. They’re planning to do it again.

“It feels so unique right now because this is all so new and fresh,” said White, who describes himself as an extrovert. “You feel like you’re cracking through ... this social wall that we’ve all built for ourselves.”

While the state’s Scandinavian atmosphere may make for better hermits than in other states, people are finding ways to stay social during social isolation. They are meeting on Google Hangouts, livestreaming on Facebook and making solo treks out to their friends’ homes. Despite the risks, some say they are still trying to meet as groups — while staying the recommended 6 feet apart.

Maintaining contact with friends and family is essential during this time, said Liz Vogt, a clinical psychologist in Minneapolis. Extended isolation can have neurological impacts, she said, including depression, fatigue and insomnia.

“It’s so important to keep contact with your support network as you try to cope with something that is actually traumatic in a lot of ways,” Vogt said. “Something like this really disrupts any sense we have of control of our lives.”

Media and technology is one way to stay connected, Vogt said. She shifted her practice to phone or video sessions; soon, they will start a yoga group for adults and dance therapy for teens.

It’s also a new mode of business for Indeed Brewing Co. With its taprooms closed, the brewery started a happy hour variety show from its Minneapolis location and is broadcasting it live on Facebook. More than 100 people tuned in at a time for the first show.

It’s partly a financial decision, as 50% of the brewery’s revenue evaporated overnight, said Indeed owner and CEO Tom Whisenand. He also felt a sense of responsibility to provide a virtual space for people who would normally come in for a beer.

“People are just sitting at home right now, looking for things to do,” Whisenand said. “The world has changed and we need to find ways to continue to contribute.”

Still, others continue to meet in person.

Sean Hayford Oleary, a web developer from Richfield, is already accustomed to working from home. Last week, he drove over to a couple’s house to have a drink and talk: “No handshakes, no hugs. Just hanging out,” he said.

He hopes to continue the pattern over the next few weeks, whether it’s seeing friends one-on-one or having someone over to work together. He’s wary of larger at-home gatherings, like board game nights, which he said pose a greater risk for contact.

“I don’t want to set myself up for something that’s not sustainable at all of completely zero contact, ever,” Hayford Oleary said. “We’re social creatures. I think we do need to be able to see people in some capacity.”

The coronavirus hasn’t stopped Mary Lynum and her neighbors in south Minneapolis from seeing each other.

They normally gather at a neighbor’s lawn to catch up, and set new rules for two recent small gatherings: Bring your own food, your own bottle of wine and stay at least 6 feet from each other. One neighbor even brought a tape measure to make sure.

Lynum said she doesn’t want to make light of the situation; her husband, who has asthma, was unable to join them outside. But a break from dire news is necessary, and being with others at a safe distance gives them a chance to commiserate.

“I think it’s really important just for our souls and our spirits,” she said. “It makes us feel like we’re not alone.” 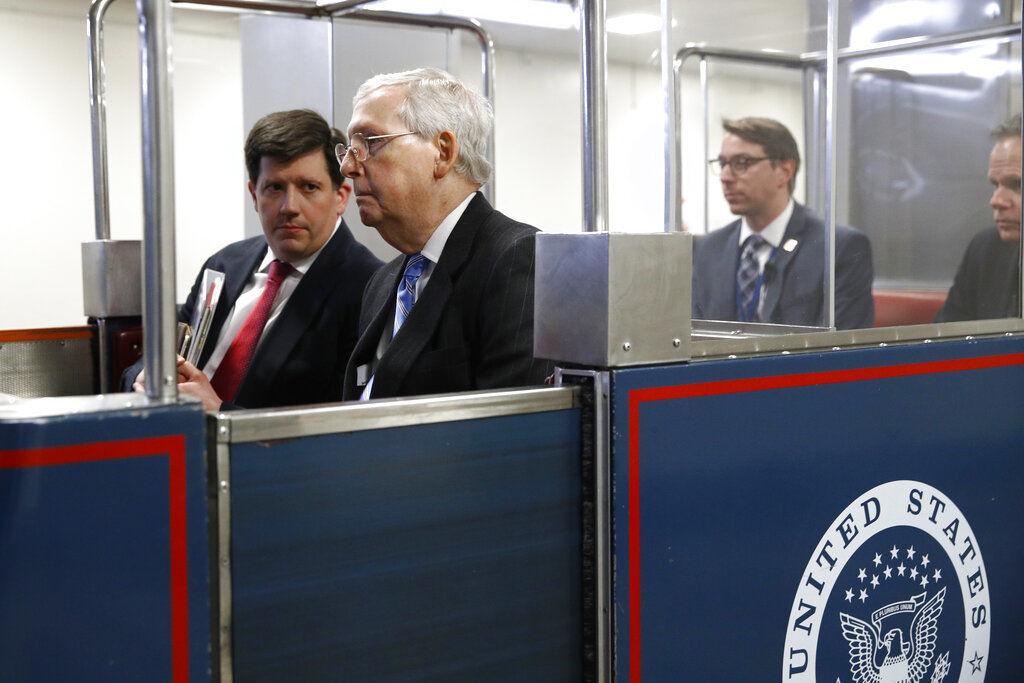 In this March 18, 2020, photo Senate Majority Leader Mitch McConnell of Ky., rides a subway car on Capitol Hill in Washington before a vote on a coronavirus response bill. (AP Photo/Patrick Semansky)

By releasing these inmates, public officials are trying to limit the spread of COVID-19 by having fewer inmates in close quarters with each other. However, those with serious offenses have not be granted the same opportunity.

“It was one of those things where it was common sense while also following those public health directives of trying to socially distance people and also protect the safety of the staff in the jail and law enforcement out in the field,” Sonneman said.

According to Sonneman, those who are eligible for early-release are those convicted of or accused of low-level, non-targeted misdemeanors—meaning those arrested for assault and other more severe crimes are ineligible.

“If someone has a non-targeted misdemeanor … instead of bringing them to jail, we’ll hand them a citation and give them a future court date,” Sonneman said.

As for those who were already in the county jail, Sonneman said she and members of her staff compiled a list of those who were in custody and ranked them in three categories, as well as determining whether they were a threat to public safety and a flight risk.

The first category contained inmates who Sonneman and her staff had no issues with granting a release to or a release with conditions.

The second category contained inmates whose release could be argued in court and then allowing the court to decide what the best option was.

Finally, the third category contained inmates who Sonneman and her staff felt were not fit to be released and that continued incarceration was a matter of public safety.

Sonneman described the people in the third category as those who are awaiting murder and criminal sexual conduct charges and other dangerous, high-risk felony cases.

Without identifying who they pertained to, Sonneman said conditions for those released ranged from wearing GPS monitors to electronic alcohol-monitoring patches, while others were forbidden from using or carrying firearms, entering bars or liquor stores and making contact with any reported victim attached to their case.

“(We’re) trying to put some protections in place for the community,” Sonneman said.

Many other conditions imposed are common for a person released from jail, according to Sonneman, such as maintaining law-abiding behavior and contact with an attorney and returning to court as directed.

Two people have been diagnosed with COVID-19 in Winona County, the first cases for the county as the disease continues to spread throughout the world.

The individuals are both older than 70 years old, according to a release from Winona County Health and Human Services.

These patients are now in isolation and recovering. Anyone who has had contact with these individuals will be contacted by the Minnesota Department of Health.

No more information will be released about these individuals to help protect their identities.