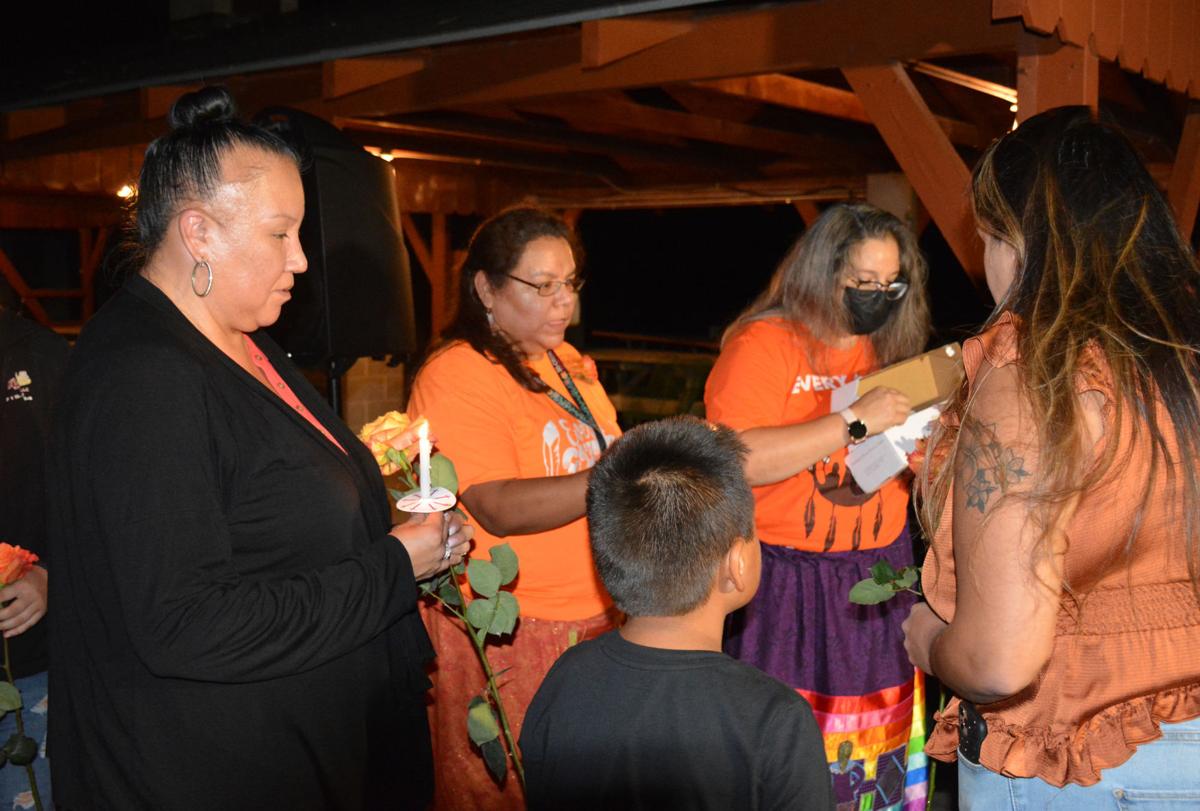 Candles are distributed for the vigil to honor Native American children who stayed at the Tomah Indian Industrial School. 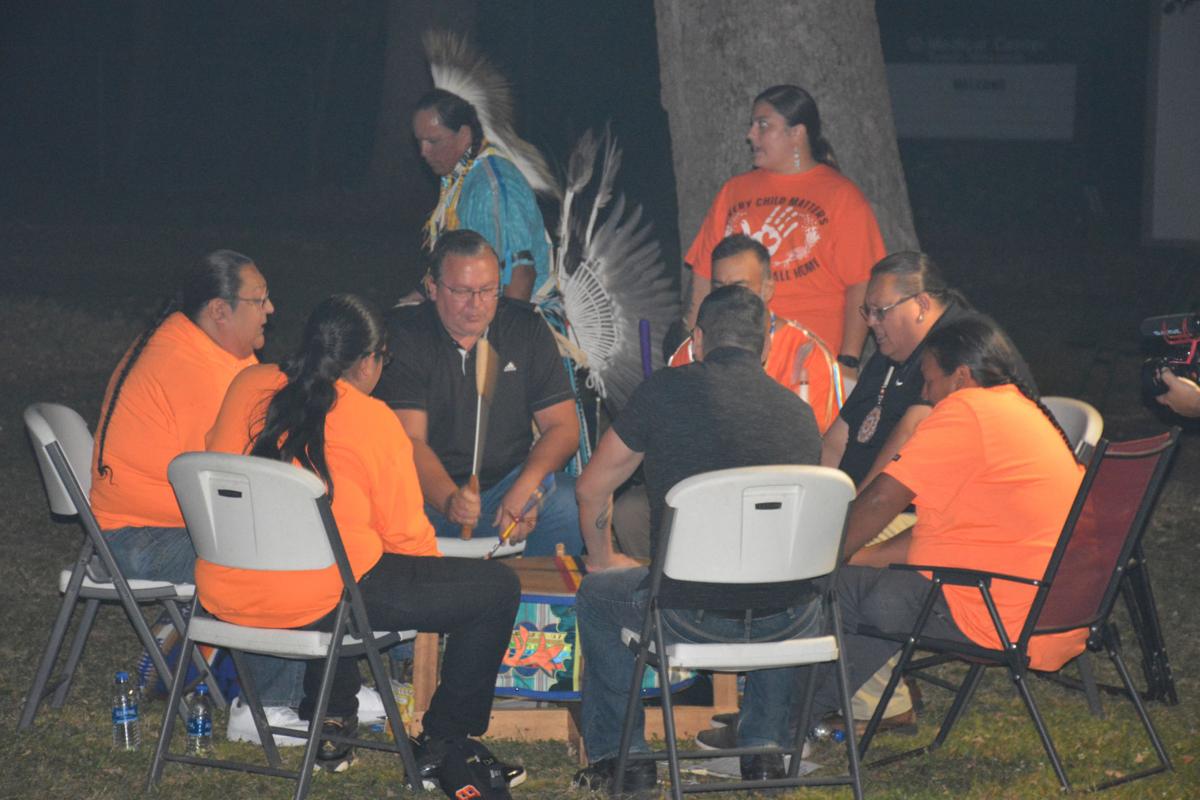 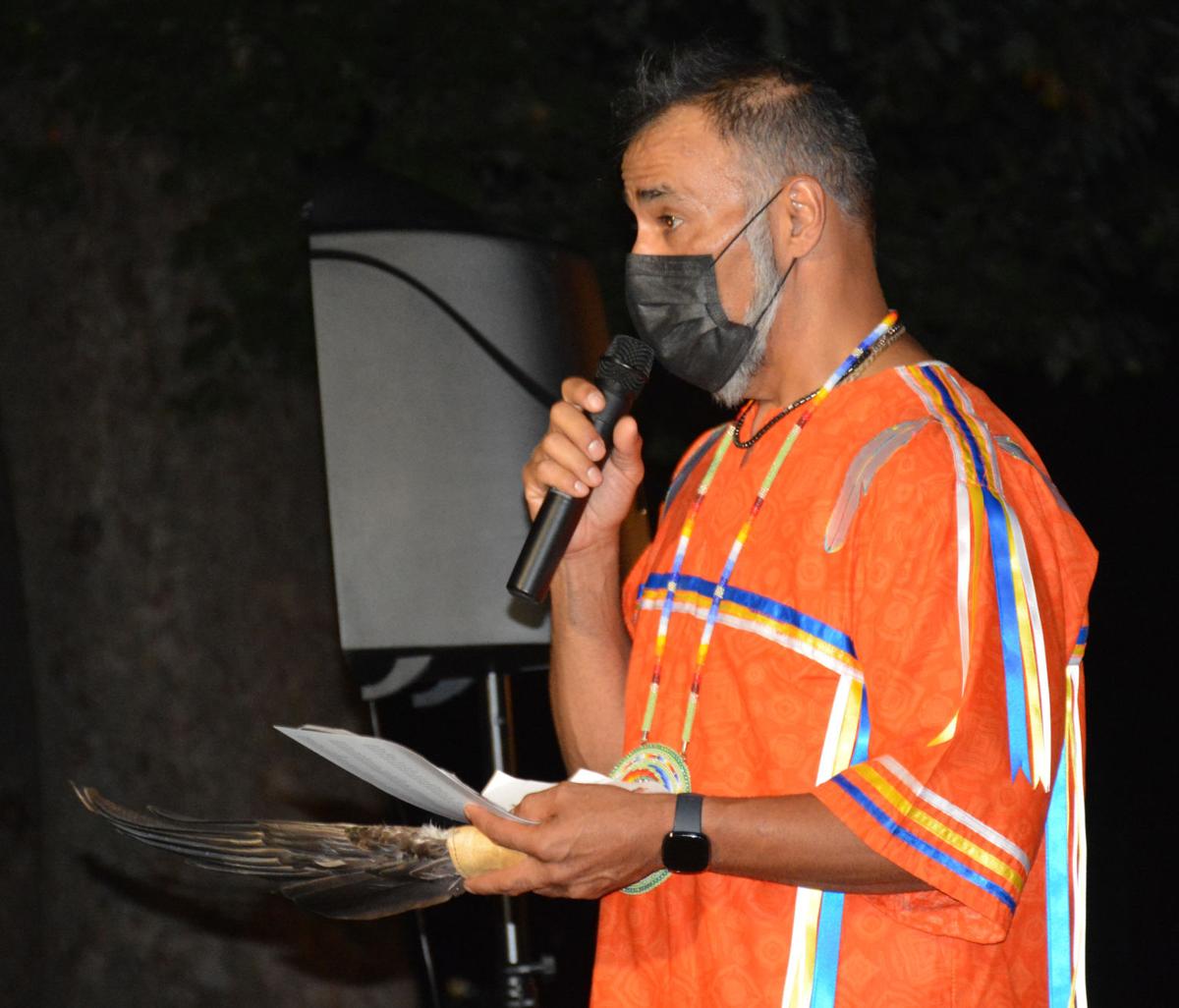 Jon Greendeer speaks to the audience at the site of the former Tomah Indian Industrial School.

TOMAH — With dozens of his Ho-Chunk brethren present, Ho-Chunk elder Gordon Thunder delivered a prayer in his native language.

It’s a language that survives despite a determined attempt to extinguish it.

Thunder shared his prayer Thursday during a remembrance ceremony for the thousands of Native American children forced to live in boarding schools during the late 19th and early 20th centuries. The ceremony, which included a candlelight vigil, was held on the grounds of the Tomah Industrial School, now the site of the Tomah Veterans Administration Medical Center.

Native Americans view the schools as a stain on American history. Most schools were established by religious denominations with the blessing of the federal government. Their purpose was to Christianize and Americanize indigenous children, many of whom were forcibly separated from their families and never allowed visits from their parents.

“Tonight’s topic is not an easy one to discuss,” said Jon Greendeer, whose grandparents lived at a boarding school in Neillsville. He said children who lived at the schools were stripped of their heritage and “personhood.”

Interest in the topic was triggered by the discovery of 215 unmarked graves at two former boarding school sites in Canada, where a similar program existed. The Canadian government has launched a truth and reconciliation commission, and the Department of Interior and Bureau of Indians Affairs recently began an investigation in the U.S.

In a June 22, 2021, memorandum, Interior Secretary Deb Haaland wrote that the Indian Boarding School Initiative has been created to “identify boarding school facilities and sites, the location of known and possible student burial sites located at or near school facilities and the identities and tribal affiliations interred at such locations.”

Haaland wrote the children at the boarding schools suffered “routine injury and abuse” and that the assimilation policies were contrary to the doctrines of “tribal self-governance and cultural integrity.”

“Many who survived the ordeal returned home changed in unimaginable ways, and their experiences still resonate across the generations,” Haaland wrote.

The Tomah school opened in 1893 and closed shortly before World War II. Its enrollment peaked around 350 in the late 1920s. Local researchers have already tracked down the names of over 200 people who were housed at the Tomah school and hope to identify more.

One of the researchers, Tracy Littlejohn, said there’s a possibility that the Tomah site has children buried in unmarked graves. She said ground penetrating radar is being used to identify corpses in both the U.S. and Canada.

Thunder said his mother and uncle were among those taken to the Tomah school.

“This is something that comes close to home,” he said. “Maybe there is something we can learn and apply to ourselves and one and other.”

Adrienne Thunder said the public is only beginning to appreciate what happened.

“There is so much attention being brought to the boarding schools in the United States,” she said. “There is still a lot of history to be written.”

Greendeer said the ceremony provided an opportunity for healing and looking forward.

“This chapter never ends ... we will always remember what took place,” Greendeer said. “There is no way to walk into a topic like this with the idea there is a victory at the end of it. There is only hope.”

From Tribune files: Life in the La Crosse area in the 1950s

1951: YMCA at Seventh and Main streets

Mike Kendhammer used to look out his dining room window and see large groups of deer gathered in a field below.

The latest political wrangle about “the government” telling you what to do is the proposed federal mandate from President Biden on Sept. 9 to …

Can COVID-19 infection cause erectile dysfunction (ED) in males? The topic was raised in earlier COVID times. Now there are two threads of ind…

The Winona County Historical Society’s Voices From the Past Cemetery Walk 2021, sponsored by Merchants Bank, will be Saturday and Sunday, Octo…

Cardinal Burke out of hospital, making 'steady' but 'slow' progress in COVID-19 recovery

"I cannot predict when I will be able to return to my normal activities," Burke said. "Seemingly, it will be several more weeks."

Mu is the current COVID-19 viral variant of interest getting so much news of late. It is pronounced myoo (or mew?), using the Greek alphabet c…

Mother Nature cranked up the thermostat on the final day of September, making for very uncomfortable running conditions for the 12 teams that …

Candles are distributed for the vigil to honor Native American children who stayed at the Tomah Indian Industrial School.

Jon Greendeer speaks to the audience at the site of the former Tomah Indian Industrial School.