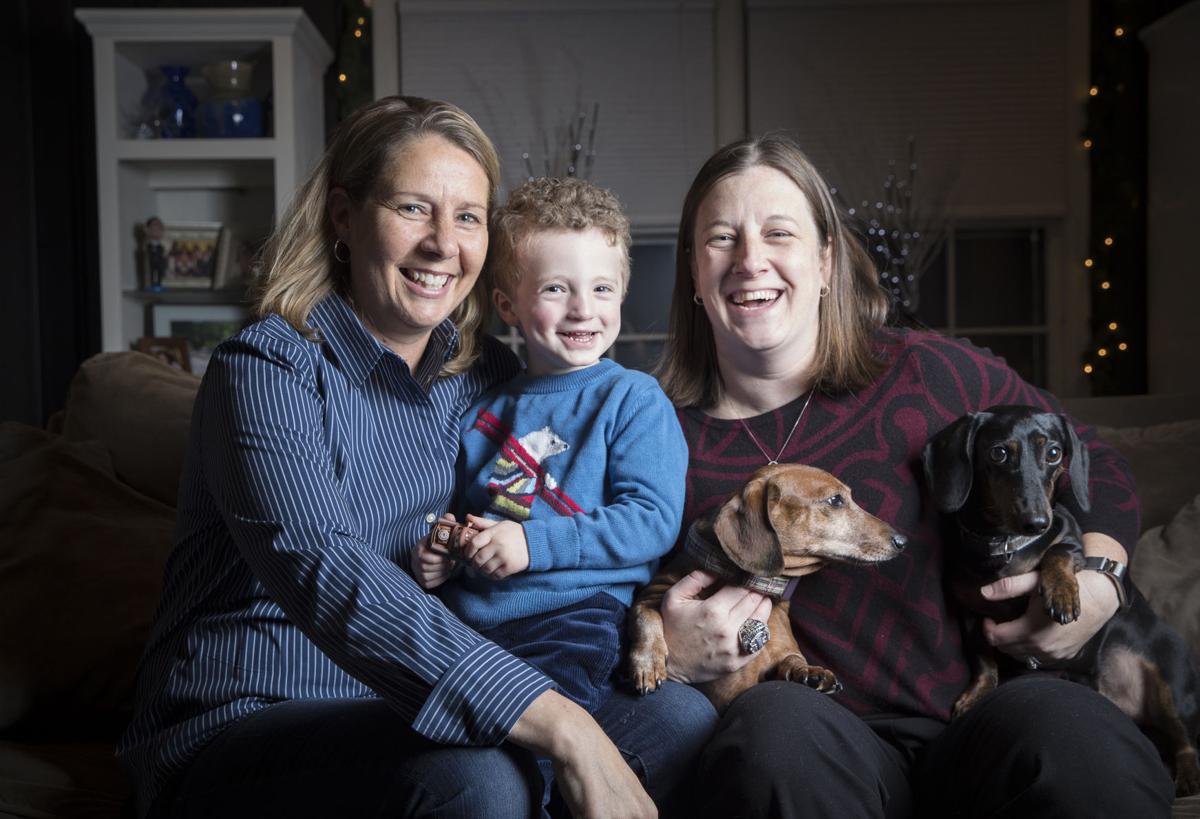 Four-time champion Lynx coach Cheryl Reeve is this year's recipient of the Star Tribune Sportsperson of the Year award. She was photographed with her wife Carley Knox and son Oliver and their two dogs earlier this month. 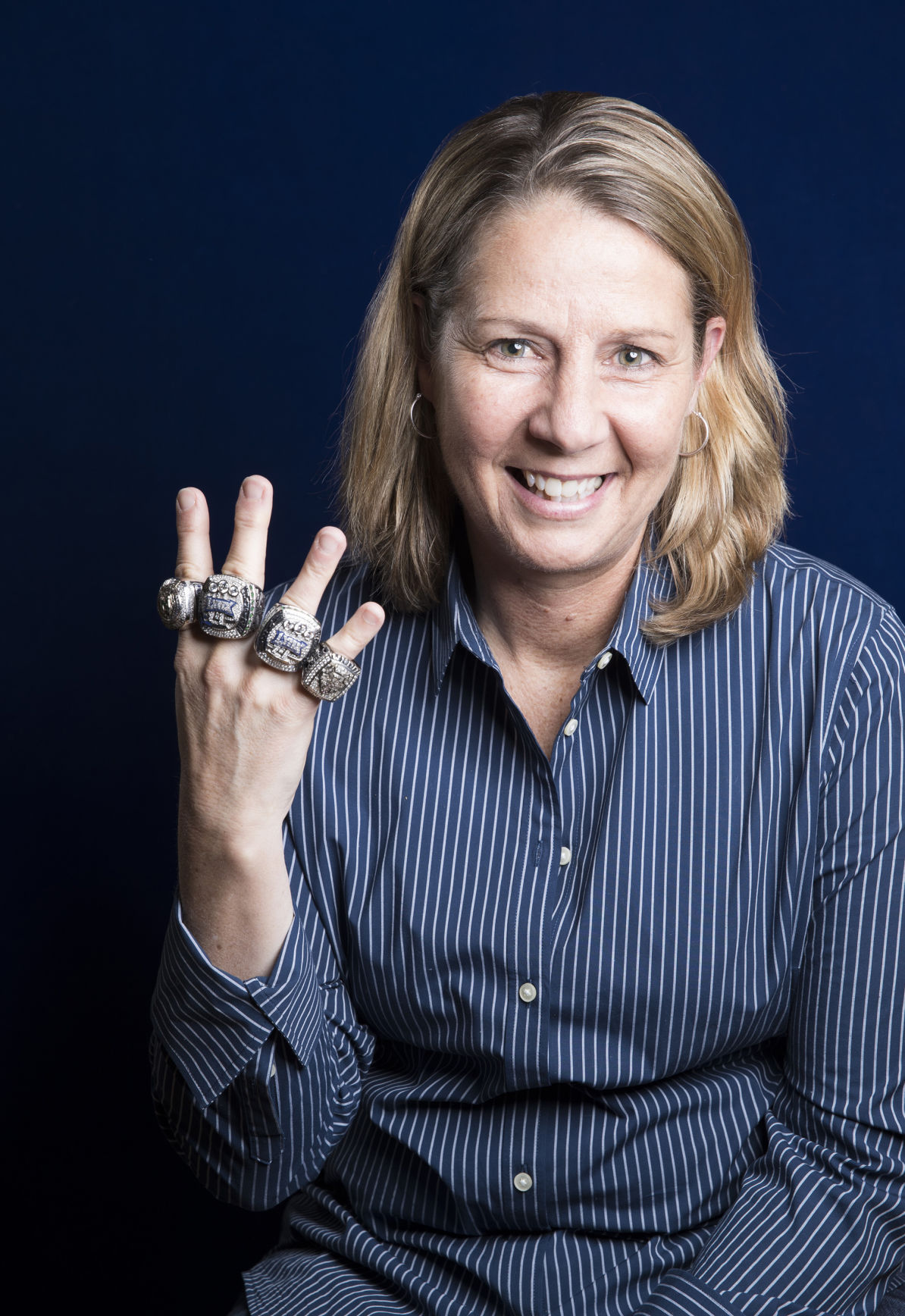 On July 7, 2016, Lynx coach Cheryl Reeve woke up in her Uncasville, Conn., hotel room to the news.

Philando Castile had been shot during a traffic stop in Falcon Heights, Minn. The day before, a black man, Alton Sterling, had been shot by police outside a store in Baton Rouge, La.

“I couldn’t imagine how they were feeling,” Reeve said of her team. “I couldn’t sit back and do nothing.”

After the morning workout, Reeve asked her four captains, “What should we do?”

They gathered beside the court and talked. Seimone Augustus about how that store in Baton Rouge wasn’t far from where she grew up. Rebekkah Brunson about growing up as a kid in Oxon Hill, Md., often seeing the police, guns drawn, running through the apartment complex.

The members of the Lynx are family.

Maybe the most overused word when it comes to sports. That, or chemistry. A cynic will tell you that closeness comes from winning. That championship rings, heavy and encrusted with jewels, are the real ties that bind.

Reeve and the Lynx might make you reconsider that notion.

Nearly three months ago, in Williams Arena, where the fans’ shrill screams may still be ringing, the Lynx won their fourth WNBA championship — matched only by the Houston Comets, who won the league’s first four crowns.

Reeve came to Minnesota in 2010 having won a couple of rings as an assistant in Detroit. A year later the Lynx started a stretch in which they have won four titles and gone to six championship series in seven years. The Lynx have gone from also-rans to being in the conversation when it comes to the best team in the league’s 21-year history.

It is for all these reasons that Reeve has been named the Star Tribune’s 20th Sportsperson of the Year. Look at the results, the unselfish play, the unity. Reeve’s leadership — off and on the court — and her ability to emotionally connect with her players have resulted in a stretch of greatness that should spill into its eighth year next summer.

There was luck. Winning the draft lottery and Maya Moore. Getting Brunson in a dispersal draft.

But, through it all: Reeve.

The Lynx traded for Lindsay Whalen and won their first three titles with three different centers. Competitive and capable, Reeve has used intensity and empathy to build a dynasty. She was the one who created an organization that MVP center Sylvia Fowles was willing to sit out a half-season to join.

Whalen will tell you Reeve changed her life. Augustus her career. Moore says Reeve has the unique ability to describe a goal while prescribing a way to get there.

Reeve likes to describe herself as the mother of an extended family. She has the players’ backs but isn’t afraid to kick their butts. Most of all, she appeals to the team by investing the time to understand what the players need. And when.

That day in Connecticut is just one example. Reeve always involves her captains in major decisions. Back in 2016 Reeve and the players talked. They decided upon a T-shirt to be worn during warmups before the next home game. In a news conference the four captains — Moore, Brunson, Whalen, Augustus — wore black shirts. “Change starts with us,” the shirts said. “Justice and Accountability.” On the back, Sterling’s name, Castile’s name, the emblem of the Dallas Police Department, whose members had been ambushed that week.

There was pushback. Four off-duty police officers walked out of Target Center that night. But talk to Reeve, talk to the players, they’ll say a dialogue was started. And, agree or not, the players saw a coach who cared.

“It came from our hearts being broken,” Moore said. “And she let us focus on it. She let us be human.”

Moore will tell you that approach makes everyone a better player. Whalen says that makes a team more than a team.

“All those battles? All those years,” Whalen said. “We’re family now.”

Reeve was sitting in her Minneapolis home with spouse Carley Knox and their 3-year-old son, Oliver Knox-Reeve. Knox is the vice president of business operations for the Lynx, who had to move from Target Center to Xcel Energy Center in St. Paul last summer but still managed to increase their season-ticket base.

The two met in Detroit in 2006, when Reeve was a Shock assistant coach and Knox was the team’s director of sales and marketing.

They married in 2011, days after the parade celebrating the Lynx’s first title. Together, they are a Twin Cities power couple.

The addition of Oliver only made Reeve more determined to use that platform.

For instance: “Everyone talks about great role models for girls,” Reeve said. “We’re saying, ‘No, we’re affecting the next generation. We’re affecting society.’ When boys — young boys — come to our games wearing a Lindsay Whalen jersey — I’ve heard stories about boys saying, ‘When I grow up I want to be a Lynx,’ not knowing at that age. ... The most powerful thing we do is show boys strong powerful women at a young age. When they grow up, become leaders, their mindset is different.”

At Halloween the neighborhood kids were all going as “Star Wars” characters. The night before, Oliver, set to be Han Solo, announced he wanted to go as the heroine Rey, setting off an unsuccessful last-minute costume search. In the end he went as Han Solo. The point is that Oliver saw someone to be emulated and nothing more.

Sitting at the island in her kitchen, Reeve smiled at her son. “We’re just trying to make the world a better place, aren’t we?”

Reeve tries to achieve that goal in many ways.

Just follow her Twitter timeline. The me too movement, equal rights for women, coverage of women’s sports, opportunity for young women in sports. LGBTQ issues.

There are other coaches who use their platforms to express themselves. Gregg Popovich in San Antonio and Steve Kerr at Golden State are two NBA examples. For Reeve, once she ascended to a head coaching job, it was time.

It was her turn to be a leader. She’d been a player and an assistant coach. But when you become a head coach, it’s different. Like being the head of a company. “I’d seen a lot of the world,” she said. “I saw how I wanted to do things.”

Before you snort in derision at such a new-age label, hear her out. Loads of coaches are flush with intensity. Lots of coaches dazzle with X’s and O’s. But, to Moore, Reeve goes beyond that with the ability to get players to buy a vision, set a goal and accomplish it.

A first overall draft pick, Augustus spent her first four seasons scoring lots of points but winning few games. When Reeve arrived in 2010, she got her star to buy into the idea of scoring less, defending more. After the 2016 season, Reeve convinced Brunson to add the 3-pointer to her arsenal.

Halfway through the 2010 season, Reeve sat Whalen down. Whalen had been to two WNBA Finals, had been an All-Star and first-team All-WNBA. Reeve wanted more.

“She gave me a vision,” Whalen said.

Reeve said Whalen needed to focus more. She set goals for every practice: 14 points, eight assists, five rebounds. She had Whalen talk to team nutritionists, urged her take better care of herself.

It was night and day. A 33 percent shooter scoring 10.5 points a game before the talk, Whalen finished that season shooting nearly 50 percent and scoring 14.3 points over the final 18 games.

That fall Whalen was part of a U.S. team that won the world championship in Prague. The following summer came the first of four WNBA titles.

“This conversation changed my life,” Whalen said. “Changed my professional career. Since then I’ve won a championship (WNBA, Olympics or world) every year.”

This year, in the relatively cavernous locker room at Xcel Energy Center, Reeve and Whalen fell into a routine of sitting and talking for a while after every game. About the game, life, the team, anything.

“My favorite part of the season,” Whalen said. “We’d sit and have a cold ... water,” she said, smiling and mouthing the word “beer.”

“There is such a connection. We all know she’s the coach. She is in charge, she built this thing. But we’re all in this together. ‘What are you doing?’ or ‘How is your family?’ It’s my favorite time.”

His death, which occurred Monday night after a struggle with Minneapolis police officers, was under investigation Tuesday by the FBI and state agents.

Watch now: Here's video of the incident in which a white woman called police on a black man in Central Park after a dispute about her unleashed dog.

Four-time champion Lynx coach Cheryl Reeve is this year's recipient of the Star Tribune Sportsperson of the Year award. She was photographed with her wife Carley Knox and son Oliver and their two dogs earlier this month.